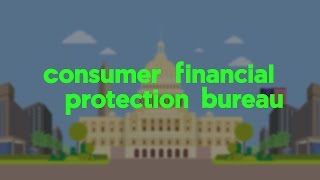 What Is The CFPB?
(Image by YouTube, Channel: Information Station)   Details   DMCA

It was exactly seven years ago -- July 21, 2010. I was a professor and a witness at a Senate hearing about the TARP Wall Street bailout.

I remember that day perfectly because July 21, 2010 was also the day President Obama signed Dodd-Frank -- the Wall Street reform bill that toughened up the rules for Wall Street and created the Consumer Financial Protection Bureau.

The financial industry hated all of it, but they really, really hated the idea of the Consumer Financial Protection Bureau. They spent more than a million dollars a day lobbying against Wall Street reform, and their main target was to stop a new agency whose sole purpose is to make sure Wall Street couldn't cheat people in the fine print of mortgages, credit cards, student loans, and other financial products.

We didn't have any lobbyists on our side. No big money donors. But we had people all across this country who fought back and won -- and today is the sixth anniversary of that little agency opening its doors.

Was the fight worth it? You bet! The Consumer Financial Protection Bureau has already handled more than a million complaints and forced the biggest financial institutions in this country to return nearly $12 billion directly to the people they cheated. (Yay!)

The CFPB is government that works for the people. That's the good news -- but there's bad news, too. The CFPB is under attack.

President Donald Trump has promised "a major elimination of the horrendous Dodd-Frank regulations." The 2016 GOP Platform said the director of the CFPB had "dictatorial powers" and called for the agency to be abolished. And just last month, the House Republicans passed a bill called the "Financial CHOICE Act" that would roll back Wall Street reform and gut the CFPB.

In the meantime, the Republican leadership is also doing everything it can to undermine the CFPB's work. Last week, I wrote to you about the CFPB's new rule allowing people who are cheated by financial institutions to join together in class-action lawsuits and hold big banks accountable. Surprise, surprise: this week, the Republicans mounted an effort to reverse that rule for their big bank buddies.

The big banks and their armies of lawyers and lobbyists are thrilled that the Republican leadership wants to fire the cops on Main Street -- and that shouldn't help you sleep at night. In 2016 alone, even with Dodd-Frank in place, the banks haven't given up on trying to scam their way to higher profits:

Meanwhile, the big banks are still "too big to fail." Actually, some are bigger than ever.

The financial crisis is long past, yet the banking sector is still loaded with corporations that could blow up the economy? Good grief. We need stronger rules, not weaker ones. And we need a strong consumer agency in place that's fighting for some accountability and a level playing field.

Today, I'm celebrating the Consumer Financial Protection Bureau's birthday -- I may even have a happy birthday cupcake! And I'm giving that agency the best birthday gift I know: I'm fighting my heart out to keep it up and running to fight for working people in Massachusetts and all across this country.

Will you fight your heart out for the CFPB with me? Sign up now to say you're in.

Related Topic(s): Birthday; Citigroup; Consumer Financial Protection Bureau; Financial, Add Tags
Add to My Group(s)
Go To Commenting
The views expressed herein are the sole responsibility of the author and do not necessarily reflect those of this website or its editors.