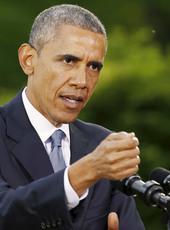 President Obama says progressives who warn that trade laws let corporations overrule U.S. law are "making this stuff up." Two attacks on U.S. laws and regulations are underway right now, illustrating how the "corporate courts" provisions in the Trans-Pacific Partnership (TPP) would open our country up to attacks from foreign corporations.

"They're making this stuff up."

Sen. Elizabeth Warren, legal scholars and others have been sounding the alarm about the Investor-State Dispute Settlement (ISDS) provisions that have leaked to the public from the secret TPP negotiations. They are warning that the ISDS provisions, as the New York Times put it, "would allow foreign corporations to sue the United States government for actions that undermine their investment 'expectations' and hurt their business, according to a classified document."

President Obama says Warren and these others are being "dishonest." In his speech at Nike the other day the president said, "Critics warn that parts of this deal would undermine American regulation -- food safety, worker safety, even financial regulations. They're making this stuff up. This is just not true. No trade agreement is going to force us to change our laws. This agreement would make sure our companies aren't discriminated against in other countries."

But there are already disputes in trade tribunals that could result in U.S. laws being changed.

Country-of-origin (COOL) laws requiring that meat and pork (and fish and chicken) be labeled with their country of origin have been challenged by meat and pork corporations in Mexico and Canada. U.S. consumers want to know where their products come from. Apparently, letting consumers have information about the origin of the products they buy could cause them to make choices that hurt the profits of certain non-U.S. companies. So they want to make that against trade rules.

These companies took their complaint to the World Trade Organization, and WTO ruled against the United States.

Canada and Mexico can put retaliatory tariffs on U.S. imports, including pork and beef, if the U.S. does not change its laws.

This is similar to the ban on putting "dolphin-safe" on the label of canned tuna because giant Mexican corporations causes U.S. consumers not to buy their not-dolphin-safe tuna. April's post, Tuna Case Shows Everything You Need To Know About "Trade" Agreements, explained:

"The World Trade Organization ruled this week that the United States is not being fair to Mexican seafood companies by denying 'dolphin safe' labels on their tuna, meaning that American citizens won't know whether they are buying tuna that is caught in a way that we deem would protect dolphins.

"Let that sink in. A foreign trade court has prohibited the United States from letting citizens know what is or is not in a product. This non-U.S. "court" is nullifying our federal Dolphin Protection Consumer Information Act."

Let that sink in.

Canada says our financial reform laws violate our trade agreements. The "Volcker Rule" prohibits the giant banks from certain kinds of risky "proprietary" speculation that could hurt their customers and ultimately taxpayers. This is keeping some of the big banks from speculating in certain Canadian debt.

Related Topic(s): Corporations; Trans-pacific Partnership, Add Tags
Add to My Group(s)
Go To Commenting
The views expressed herein are the sole responsibility of the author and do not necessarily reflect those of this website or its editors.