Tuesday brought historic victories for candidates like Ravi Bhalla, who faced down racist attacks and won. 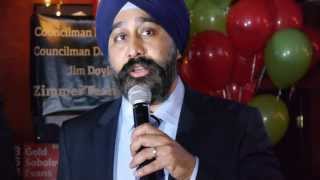 If there is an American elected official who is the opposite of Donald Trump, it could well be Ravinder Bhalla. A Sikh-American lawyer with a record of fighting discrimination, Bhalla says, "I'm everything that Trump hates. A brown man wearing a turban, and a proud American with the know-how to stop his assaults on our country's values."

And while Trump is losing, Bhalla is winning. On Tuesday, when voters across the country rejected the president's Republican allies in what political analysts referred to as "nothing less than a stinging repudiation of Trump on the first anniversary of his election," Ravi Bhalla was elected mayor of Hoboken, New Jersey. The win in the city of 55,000, located just across the Hudson River from Manhattan, was celebrated by the Sikh community in the United States, which has frequently been targeted by racists who know little about the 500-year-old religion that has produced many political leaders in India and Canada.

"Given how much we've endured in this country, and frankly the fact that we have been here for more than a century now in the U.S. and have felt largely ignored and neglected as a minority community, this is for us a signal shift, where we feel like we're getting on the map. This is a major development for us," declared Simran Jeet Singh, a religion fellow at the Sikh Coalition. "And it comes in a context where, like many minority groups, we're facing xenophobia."

Bhalla's victory came on a night of breakthrough victories for women, people of color, members of the LGBTQ community, democratic socialists, and others who have been the targets of Trump's crude slurs and discriminatory policies. Like many of the candidates who ran on the state and local levels, in partisan and nonpartisan contests, Bhalla was blunt about his disagreements with the president, telling interviewers, "I am the son of two Indian immigrants and I'm willing to stand up against President Donald Trump whenever his policies are not in line with the U.S. Constitution, and in this case the New Jersey State Constitution."

Related Topic(s): Mayor; Ravi Bhalla; Trumpism, Add Tags
Add to My Group(s)
Go To Commenting
The views expressed herein are the sole responsibility of the author and do not necessarily reflect those of this website or its editors.