Click Here to Remove All Ads
Go to source
Yesterday was the tenth anniversary of Rachel Corrie's death. Rachel was a 23-year-old peace activist from Olympia, Washington, and a student at Evergreen State College, who was crushed to death by an Israeli/American (Caterpillar) bulldozer on March 16th, 2003, while trying to protect the home of a Palestinian family from demolition. As Tom Wright and Therese Saliba correctly state in a Counterpunch  piece, Rachel was killed resisting a "policy of mass collective punishment, and deliberate destruction of civilian infrastructure, a war crime."

For nine years, Rachel's parents, Craig and Cindy, sought some kind of justice from the American and Israeli legal and political systems, only to confront "a powerful and deeply entrenched foreign-policy apparatus that grants virtual impunity to Israel, even for the killing of an American peace activist."

We can drop "virtual." And it's not just impunity, it's complicity.  Rachel Corrie was killed not just by American equipment, but by a regime that could not commit the crimes it does without the substantively unconditional political, military, economic, and diplomatic support that the United States provides -- for which every American (including those who do not want to know or say anything about all this) is responsible.

In August of 2012, the Israeli court ruled, predictably, that "the military was blameless in Rachel's death, and that "the Gandhian tactics of the ISM [constituted] 'de facto violence'."

As Jimmy Carter said, the "Court's decision confirms a climate of impunity, which facilitates Israeli human-rights violations against Palestinian civilians in the Occupied Territory."

The political and media castes of her own country make sure that Rachel Corrie remains as unknown and unremembered as possible. No Oscar-winning historical drama here. Please, think about what's remembered and retold and memorialized and silver-screened, and what's not, and why. Did Chris or Lawrence or Ed or that Rachel remember this Rachel yesterday, or ever?  When you see the image below of Rachel standing in front of the Caterpillar, count the number of times you've seen that image -- for which we are responsible -- versus the number of times you've seen the image of the Chinese kid standing in front of the tank -- which did not run him over and for which Americans are not responsible -- in Tienanmen Square. You won't need many fingers.

Outside of the United States, and within the serious American left, Rachel is properly revered as a heroic champion of justice and humanity.  Her life has been the subject of a play, My Name is Rachel Corrie,  based on her diaries and emails, as edited and presented by the actor Alan Rickman and the journalist Katharine Viner. The play has been performed to appreciative audiences worldwide, despite constant attempts by Zionist groups to shut it down (here, here, here). For many throughout the world -- and I hope to make it a few more -- Rachel Corrie has become an inspiration for carrying on the fight that took her life:

In their travels across the country and around the world, Cindy and Craig encounter young people who have been inspired to act by Rachel's story. "That happens over and over again," Cindy said. "People say that her example resonates with them, and makes them feel they have to do something more with their lives." She told us of a young man who approached them at a recent talk in Washington, D.C., and said that Rachel was the reason he had become politically involved. Craig recalled an actress who had done two long runs of the play in Australia, then went and volunteered in Africa. "And she told us, "I didn't do that, Rachel did that, that's not anything that was in me before I played Rachel.'"

Cindy spoke of being approached by Palestinians from the beginning. At first, she said, she didn't understand why it was so important for Palestinians, young and old, to come meet them. Many would cry. "It took me awhile to understand it, and all that they were carrying, and have been carrying for over sixty years. I think it's that there was this American kid--and as they struggled to get their message out and struggled to challenge what's happened to them--she came, and she did that. I know, because they tell me how much that means, and it's very personal."
(See the Rachel Corrie Foundation web site)

Tragically, Infuriatingly, Rachel is only one of the Americans whose murder by Israel was abetted, approved, and effaced by the United States Government.  She joins the 34 American sailors killed (174 wounded) when the Israeli Air Force sank the USS Liberty, while the Secretary of Defense and the President of the United States twice recalled the American planes that had been launched from nearby carriers to defend the ship. When Sixth Fleet carrier-division commander Lawrence Geis demanded confirmation of the recall order, he was shocked to hear "President Lyndon Johnson came on with a comment that he didn't care if the ship sunk, he would not embarrass his allies."  And let's not pretend the plural is relevant here: there is no other "ally" that would have been granted the right to sink an American ship.  (Here, here, here)

Rachel also joins 18-year-old American citizen Furkan Dogan, who was shot five times by Israeli commandos on an unarmed civilian ship in international waters in 2010.  Furkan was shot in the face, head, back thorax, left leg, and foot -- all except the face back-entry wounds, with the face wound showing stippling indicative of a point-blank shot. According to the report of the Office of the United Nations High Commissioner for Human Rights on the incident, Furkan had apparently been "lying on the deck in a conscious, or semi-conscious, state for some time" before he was shot in his face. (Here, here, here.)

So Rachel Corrie is among the many Americans who have been killed by Israel, to the great non-consternation -- indeed, benign indifference -- of the United States Government.  For the USG, for American presidents, nobody can stand in the way of the Israeli war and settlement machine, as Rachel so bravely tried to do.

There is no more urgent task -- none --  for progressive-minded Americans than to end American involvement in Israeli crimes against humanity, as well as Israeli impunity for the murder of Americans.


The day she died: 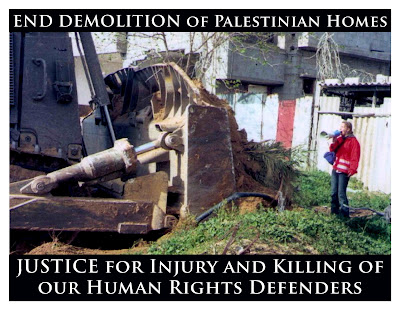 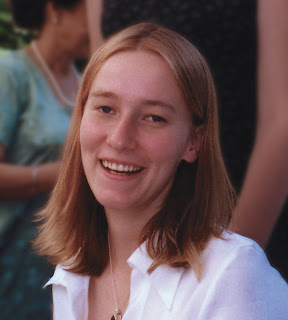 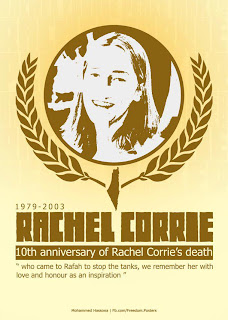