I am in a city full of formidable-looking men with automatic weapons posted at gates and doors.  There is no hostility in the dark-eyed gazes under thatches of jet-black hair as you pass by them to walk inside a restaurant or hotel.  They respond politely in kind when you say "salaam" and place your hand over your heart, in the warm greeting meaning "peace."  These are your guards against the bad guys, whoever they are, and they look like swell fellows. They can be a bit disheveled in threadbare tan uniforms or street clothes.  What's not disheveled is the alertness in their eyes and the easy and expert manner with their weapons.  I'll sleep well knowing ours is posted at the door of the hotel compound tonight.  No one's getting past this guy.

Other than a couple of military helicopters overhead once or twice, not much of an American military presence.  Smart.  Put on jeans and a tee-shirt and mind your own business, and in many parts of the you'll have no problem.  Putting on a foreign uniform and carrying a weapon, though, is a challenge to the blood of all Afghans. The image of the little starving girl on the Youtube video haunts me.  How can that be after the U.S. had a full five years to stabilize the country, with the run of the countryside while there was no real insurgency to speak of?  IEDs against U.S forces were almost non-existent until 2005.  Journalist Ann Jones says that after the 2001 overthrow of the Taliban, people were full of hope and ready to work, to build their country, finally, after 30 years of war of one kind or another.  And then...nothing.

A British Lord in 1919 asked, after the Empire lost interest in Iran after Czarist Russia withdrew, why "Persia" should not be "left to rot in picaresque decay."  It seems the same colonial attitude prevails among American policymakers, who refuse to see the connection between abject misery and the insurgency.  Everyone here is hungry, but they don't complain. The lessons of the Marshall Plan after World War II have been lost.  For every man, woman, and child over $500 dollars was spent for four years after the shooting stopped in Europe, compared to $50 per person in Afghanistan.  It's a myth to say the reconstruction failed because of corruption. It never arrived in the first place.  Corruption, both internal and in the very structure of how reconstruction contracts are managed by foreign contractors, got a good chunk of what little aid did arrive.

Steve at dinner says this war is crazy. Give them jobs and we could pull out. He's a journalist who has been in-country for five years and has worked for USAID.  We went to the Intercontinental, where NGO and some contractor types hang out, practicing their smatterings of Pashto, although some ex-patriots have become quite fluent.

We talked to some men digging trench for telecommunications cable on the side of the road.  They said the pay was $4 a day.  Everything needs doing.  Everything. Sidewalks need to be built, open sewer trenches need to be put underground, and the roads, wow, the roads.  Even in Kabul going down a side street can be a jarring experience.  And Kabul has the good roads.  The ones in the countryside on which much of the population depends to bring their produce to market or their children to clinics are like one big rut with a few level spots.

Afghanistan has some of the sweetest, tastiest fruit in the world.  For lunch I had a mango drink, and it was wonderful.  But much of the harvest rots in the countryside for lack of roads you can drive more than 15 miles per hour on.  Some cold storage centers would fix the problem, but we can't afford to give them these, although we can afford plenty of tanks and Humvees.

I have lost all concept of what time it is here, all I know is it's dark.  I'm Not really tired though I should be after a 20 hour flight/stopovers and a few days of little or no sleep.  It's electric.  This what I call a city.

The way your reconstruction money is getting spent in Afghanistan is now getting hammered out in a conference committee on War Supplemental Appropriations bill, co-chaired by:

The key pressure points are manageable now, and you can make a huge difference by calling these two at this time, asking them to create jobs for Afghans.  At 40% unemployment, it's the only thing that will stabilize this country and allow US troops to go home. Print out this Mission Statement, then fax it to them.

Ralph will be blogging from Afghanistan this week.  You can follow it at JobsForAfghans.org. 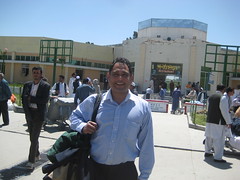 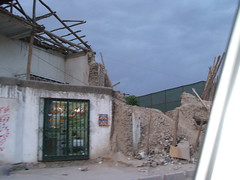 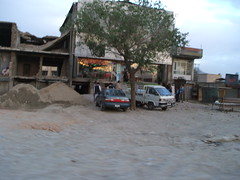 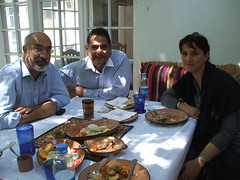