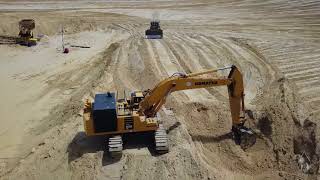 The "not in my backyard" or NIMBY crowd generally gets a bad rap. They most often raise their hackles in opposition to high-density housing being located in their neighborhoods. NIMBY restrictions on construction have been a major factor in soaring housing costs in New York, Los Angeles and other major cities.

I am practicing a different sort of NIMBY-ism these days, however taking part in a local resistance effort against a frac-sand mining site and make no apologies for it.

Last summer, my wife and I moved out to southern Utah. We wanted to be near Best Friends Animal Sanctuary, where we had been volunteering on vacations for a decade. We also wanted to be in a beautiful part of the country. Our new home, Kanab, is located between Grand Canyon and Zion national parks, with the Escalante Grand Staircase National Monument just to our east. The area gives us endless opportunities for exploring and hiking.

It now looks like our plans are in danger. A start-up mining company, Southern Red Sands LLC, has plans to set up a frac-sand mining operation in the hills just above the city. This facility would both mine and process sand to be used in hydraulic fracturing or fracking sites in various parts of the West.

Apparently, the sand in the hills above Kanab is very well suited for fracking. It also is much closer to the western fracking sites than the current sources, which are mostly located in Wisconsin and Texas. For this reason, Southern Red Sands sees a real bonanza here.

Many of the people in the town see it differently. Kanab's primary industry is tourism, which depends both on its proximity to the national parks and monuments, and its own natural beauty. Its motto is "magically unspoiled."

That doesn't fit well with an industrial sand mining plant located on the city's outskirts. The mine and plant will be capable of operating around the clock. The noise is likely to carry for many miles on an otherwise quiet and beautiful plateau that includes well-known hiking trails and canyons such as Diana's Throne and Peek-a-Boo Slot Canyon.

The lights used at night by the mine would be a serious blemish in an area known for its dark skies and star viewing. The trucks running in and out of the facility would be yet another hazard.

Frac-sand mining and processing also uses a great deal of water, an item generally in short supply in the desert. Southern Red Sands is trying to arrange for the rights to 1,200 acre -- feet of water a year, an amount that comes to almost 1.1 million gallons a day.

Growth projections already showed the city exceeding its reliable supply of drinking water by 2035, even without the Southern Red Sands project. Adding in the demand from a sand-frac mine, which will use almost as much water as the city itself, will obviously bring that date forward quite a bit.

Apart from its impact on Kanab, Southern Red Sands has picked a location for its mine that is just over 10 miles from Zion National Park, a place of extraordinary beauty that people travel from all over the world to see. A sand-frac mine and processing facility is going to make this place considerably less appealing for decades into the future.

Suppose the people of Kanab are successful and can keep the sand-frac mine from being located here, won't it just mean that some other community has to deal with the noise and pollution of a sand-frac mine? That is possible, but stopping the sand-frac mine next to Kanab is not just about preventing a threat to the local environment.

Needless to say, this is not the most efficient way to make the cost of fossil fuels reflect the damage they do to the environment. A reasonable government would impose carbon taxes to encourage people to switch to solar, wind and other forms of clean energy. But in a country where the government is determined to ignore the damage that fossil fuels are doing to the planet, we have to do whatever we can to make wrecking the planet more expensive.

So yes, I want to protect the beautiful place that my wife and I moved to and we have come to love. But I make no apologies for an effort that if successful will make it more expensive to burn fossil fuels and destroy the environment for all future generations.

Dr. Dean Baker is a macroeconomist and Co-Director of the Center for Economic and Policy Research in Washington, D.C. He previously worked as a senior economist at the Economic Policy Institute and an assistant professor at Bucknell University. (more...)
Related Topic(s): Fracking; Mining; Pollution; Resistance; Sands; Water, Add Tags
Add to My Group(s)
Go To Commenting
The views expressed herein are the sole responsibility of the author and do not necessarily reflect those of this website or its editors.