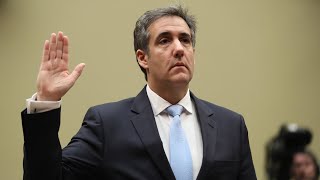 LISTEN UP! booms the gravelly voice of Elijah Cummings, now Chairman of the House Committee on Oversight and Reform, and listen up they do. What they have really been lacking is strong, honest leadership. They now have that. Order is restored on the Hill.

Let's establish a baseline for the veracity of Michael D. Cohen's testimony. Even if "every single syllable" that Cohen uttered was false, yesterday's hearing was historic in its portent, and seismic in its political effect. You can be sure that most of what he said was almost certainly verifiably true. Verifiability being the key.

Cohen has been spending quite a bit of time in the company of federal prosecutors lately. Prison focuses the mind. Cohen has nowhere left to run, and he made it clear that he no longer has any stomach for it.

His meetings with federal prosecutors have, by all accounts, grown increasingly cooperative, and there's a reason for that. His last chance to cut his prison sentence is to cooperate, and the biggest mistake he could possibly make at this stage would be to lie to federal law enforcement or Congress.

In addition, his meetings with federal prosecutors have unquestionably put him in a position to know which pieces of evidence would have the greatest impact. In all likelihood, Cohen's strategy was formed in coordination with prosecutors from the SDNY, and he likely hewed to evidence that he knew to be verifiable. Place a bet: There is sufficient evidence to indict Donald Trump.

Watching the Republicans in lockstep one after another flailing at Cohen's credibility (as though that will even be an issue in dependent cases, which will without any doubt ultimately be decided by documentary evidence) was almost painful. Almost.

The beauty was watching the Republicans suffer as their house of cards crumbled, as they fell into line behind Elijah Cummings, a chairman of far greater integrity than his predecessor. The business of Congress has been suspended for two long, arduous years. Yesterday the adults restored order.

On a day set aside to take the testimony of a liar, the truth finally won.

Related Topic(s): Michael Cohen; Republican; Republican Idiots; Truth, Add Tags
Add to My Group(s)
Go To Commenting
The views expressed herein are the sole responsibility of the author and do not necessarily reflect those of this website or its editors.