So far, the defining event of the Trump presidency has been COVID-19. To date, this pandemic has killed 136,671 Americans. Millions of jobs have been lost and the economy has been thrown into a recession. In the past, an event like this would have had Americans rallying around their president. This has not happened under Trump. Instead, his approval rating only slightly improved from 42.3% to 45.8% before dropping to its current rate of 40.6%.

The approval of the American people has been out of reach for Trump as his favorable rating has never risen above 47.8%. His predecessor jumped through hoops to fulfill campaign promises of uniting the country, while Trump has made little effort to even pretend that he represents Americans who did not vote for him. Instead of uniting the country against the common enemy of a virus, he has doubled down on division, turning the life-saving act of wearing masks into another battle in the culture wars. Past generations sacrificed by rationing "everything from gasoline to sugar to toothpaste" to win a world war against fascists; this generation will not even give up a trip to the beach to save grandma's life.

mask up, america
(Image by Robert Couse-Baker)   Details   DMCA
Trump was elected to the presidency with a minority of the electorate and has done nothing in the last four years to expand his base. Realizing that his slim chance of reelection depends on his supporters being energized, he has doubled down on the culture wars that got them to the polls in 2016. This requires them to believe that Democrats do not simply have different views about how America should be governed, but that they are against America. In this narrative, his supporters are the only patriots and support for America requires supporting Trump. America: love it or leave it.

As the protests in the wake of George Floyd's lynching have drawn attention to the white-washed mythology of our country, Trump has taken up the cause of protecting confederate statues. Trump points out that 600,000 soldiers died in the civil war, a struggle that he says "saved our union and extinguished the evil of slavery". What he ignores is the fact that this death toll includes those who were fighting to preserve the practice of holding other human beings as property. Instead of condemning these traitors, he seeks to protect their memorials and maintain their names on military installations, designations that are supposed to represent American values. 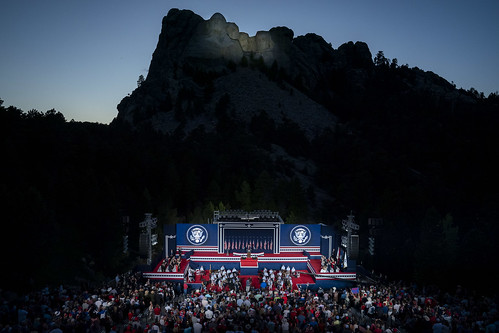 Mount Rushmore Fireworks Celebration
(Image by The White House)   Details   DMCA
Trump's version of patriotism is nothing more than thinly veiled nationalism that vilifies those who dare to treat our forefathers as anything less than deities. At a taxpayer-funded campaign rally at the base of Mount Rushmore, Trump complained that protesters had "defiled the memory of Washington, Jefferson, Lincoln, and Roosevelt" by pointing out the flaws of these men and sought to set "history's record straight". He then tried to erase the "memory of our national heritage" by proceeding to list the accomplishments of each man without acknowledging the fact that one had owned slaves, another had raped his slave, the third had slaughtered indigenous people, and the last had engaged in blatant imperialism. Absolutely no mention was made of the fact that their images had been carved into a mountain that, by treaty, was owned by the indigenous people of the area. If he was truly the "law and order" president he would have used the occasion to announce that he was returning the land to its lawful owners.

Inadvertently making the case against his own reelection, Trump defined totalitarianism as "driving people from their jobs, shaming dissenters, and demanding total submission from anyone who disagrees". During his presidency, he has pressured the NFL to fire players who refused to stand for the national anthem, attacked anyone on Twitter who dared to publicly disagree with him, and sent the military after peaceful protesters. There is "absolutely no place in the United States of America" for these actions and the electorate must, therefore, demand his removal from office.

When Trump says that the "left-wing cultural revolution is designed to overthrow the American Revolution", he ignores the fact that our founding fathers were liberals who sought to upset the status quo. Their revolution started with an act of looting in the Boston harbor and overthrew the law and order of the British Crown. Antifa, Black Lives Matter, and other protesters do not want to end the American Revolution, they want to continue the insurrection until the promise of "a more perfect Union" is fulfilled.

Being a patriot requires not standing silent while this work is left incomplete. I am a patriot.

Little Steven-I Am A Patriot_1984 Rockpalast Steven's opening speech to this song is timeless. Being a patriot is about fighting for freedom, truth and justice and not towing the political line. This is why Eddie ...
(Image by YouTube, Channel: zsnake2)   Details   DMCA

"It don't look like no new patriotism to me, it looks like blind nationalism...And that ain't right, that ain't what patriotism's all about. It ain't about accepting everything you hear on television and everything your government tells you, that ain't being a good patriot. Being a good patriot means you question every Mother F-----, everywhere, every time. Make sure your country stays your country. And it don't mean you stop being a member of the world community either. And it sure ain't about parties...loyalty to the party instead of loyalty to the truth. But if we don't like things, it's up to us to change things."
-"Little" Steven Van Zandt

________________________________
Carl Petersen is a parent, an advocate for students with special education needs, an elected member of the Northridge East Neighborhood Council, an appointed alternate to the LAUSD's CAC, and was a Green Party candidate in LAUSD's District 2 School Board race. During the campaign, he was endorsed by the Network for Public Education (NPE) Action and Dr. Diane Ravitch called him a "strong supporter of public schools." Links to his blogs can be found at www.ChangeTheLAUSD.com. Opinions are his own.

Related Topic(s): Revolution, Add Tags
Add to My Group(s)
Go To Commenting
The views expressed herein are the sole responsibility of the author and do not necessarily reflect those of this website or its editors.