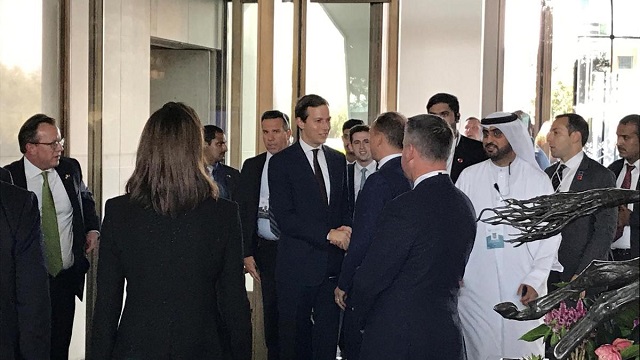 Jared Kushner, Donald Trump's son-in-law and the person Trump appointed to broker a Middle East peace agreement recently called Palestinians "hysterical and stupid." That is particularly galling language coming from a notorious New Jersey, New York, and Maryland slumlord and the son of a federally convicted criminal. Kushner's father and real estate mogul, Charles Kushner, spent fourteen months in prison after being convicted of tax fraud and witness tampering, among other crimes. Jared Kushner believes his father was wrongly convicted and imprisoned. But the wunderkind son-in-law of Trump has no problem in maintaining the status quo in the Middle East, one that has led to the large-scale incarceration of the people of the Gaza Strip in virtual desert ghetto.

Mr. Kushner does not have the business acumen to run a New York City sandwich cart, let alone a major foreign policy initiative like a final Middle East peace agreement. Such a concordat has eluded a every US president since the creation of Israel in 1948. Kushner's real estate bankruptcies are legendary, and they have resulted in him and his father panhandling for loan relief financing from Qatar, Saudi Arabia, Abu Dhabi, and China, among other countries.

In the wake of Kushner's "Peace to Prosperity" plan unveiled at a workshop in Bahrain in June of this year, government officials around the world reacted with an almost-unanimous thumbs down. The Bahrain conference more resembled a meeting of potential investors in one of Kushner's real estate scams. The Palestinians, claiming that to present an economic plan for the Palestinian territories prior to a political settlement, boycotted the Bahrain conclave. Under the "Kushner Plan," Gaza was to become a tourist resort with transport routes through Israel to the West Bank. No mention was made of the crippling Israeli and Egyptian blockades imposed on the densely populated Gaza enclave of 1.8 million people. Kushner displayed his utter ignorance of geo-politics, history, and diplomacy when he said Palestinians would reap a financial whirlwind of real estate development and tourism investment money if "there's not a fear of people doing terrorism." Doing terrorism? In Kushner's pampered rich kid myopic view of the world, "doing terrorism" is like "doing lunch" or "doing a Broadway show."

Participating in Kushner's gabfest, US Treasury Secretary Steve Mnuchin claimed that Kushner's roll-out was like a "hot IPO," an initial public offering of shares in a company. Seasoned Middle East experts, including diplomats and scholars, were far less enthusiastic, with one likening Kushner's conference to a Monty Python sketch.

Kushner also lambasted the Palestinian leadership for saying "crazy things." The son-in-law of the man who, on a daily basis, says and tweets "crazy things" believes that it is "crazy" for Palestinian leaders to condemn Israeli expansion into East Jerusalem, the West Bank, and the Golan Heights. In fact, "crazy" was Trump ordering the moving of the US embassy from Tel Aviv to Jerusalem, shuttering the US Consulate General in Jerusalem that served as the de facto US mission in Palestine, cutting off all US economic assistance to the Palestinians, closing the Palestinian diplomatic mission in Washington, and recognizing Israeli sovereignty over Syria's Golan Heights.

Kushner called the Palestinians "stupid and hysterical." However, nothing exemplifies hysterical and stupid more than Kushner family friend Binyamin Netanyahu, who once stood before the United Nations General Assembly and displayed a cartoon drawing of a bomb to "prove" that Iran was nearing development of a nuclear weapon. Netanyahu's histrionics before the world assembly was not the first time he resorted to gimmickry and lying in order to tick off a list of favorite Zionist talking points.

Kushner does not appreciate the hyper-hysterical nature of Israel and its supporters, of which he is one. The Boycott, Divestment, and Sanction (BDS) movement targeting Israel's racist and expansionist policies has resulted in hysterical extreme measures aimed at undercutting constitutional and other inherent freedoms of speech in other countries. These anti-free speech actions have been advanced by Kushner's friends and colleagues and include twenty-eight American states enacting legislation that bans individuals and companies supporting BDS from receiving state government contracts. Israel's intelligence service, Mossad, is actively working to disrupt the global BDS movement, including the operations of the Palestine Solidarity Campaign (PSC).

The anti-BDS campaign includes Mossad collecting intelligence on BDS operations in foreign countries and placing BDS leaders and supporters on INTERPOL and EUROPOL watch lists. Kushner's Zionist friends have even spoken of Israel filing lawsuits against BDS organizations and individuals abroad. There was little surprise when Mossad's anti-BDS activities in the United States were linked to the now-defunct Israeli private intelligence firm PSY-Group and Donald Trump's 2016 presidential campaign.

Kushner can whine all day long about Palestinians being "hysterical." No one is more hysterical and hypocritical than Kushner and his Orthodox Jewish cabal that includes the dodgy Chabad movement which has been tied into everything from drug and human organ trafficking to tax evasion and money laundering, as well as the 2020 presidential campaign of New Jersey Democratic Senator Cory Booker. No sooner had New England Patriots football owner and Trump Mar-a-Lago club member Robert Kraft beat a criminal charge of soliciting prostitution from a Florida massage parlor employing Chinese indentured employees, he donated his $1 million Genesis Prize Israel's version of the Nobel Prize to the anti-BDS movement. That kind of money would have paid for quite a lot of $57 "sessions" at Kraft's favorite, but now closed, Florida massage parlor. Even though Kraft was dumb enough to get caught on video tape in a law enforcement sting on illegal prostitution activities, Kushner claims it is the Palestinians who are "stupid."

Recently, Kushner's friends in Israel and Germany forced the resignation of Dr. Peter Schäfer, a foremost scholar of Judaic Studies, as director of Berlin's Jewish Museum. Using Inquisition-like tactics, Schäfer stood accused by Israel supporters of backing the BDS movement by tweeting a link to a letter signed by 240 Jewish and Israeli scholars opposing a bill passed by the German parliament that linked the BDS movement to anti-Semitism. The campaign against Dr. Schäfer was centered on the activities of an Israel-based organization called NGO Monitor. The group, which is nothing more than a cipher for Mossad, targets international non-governmental organizations tagged with being supportive of the Palestinians or the BDS movement.

Under pressure from such anti-democratic forces as NGO Monitor; its Geneva-based companion, UN Watch; the American Jewish Committee; and similar repugnant pressure organizations, the freedom of speech rights of pro-Palestine activists have been severely hampered by actions of the governments of Denmark, Sweden, Switzerland, the Netherlands, Australia, Canada, and other nations.

Mr. Kushner and his friends who gathered in Bahrain for his real estate development (land theft) prospectus seminar would trick the world into believing that it is the Palestinians who are "hysterical." When international supporters of the Palestinians decide to hit the Israelis where it hurts the most their wallets all one can hear from the offices and board rooms of Tel Aviv, West Jerusalem, Haifa, Ashkelon, Eilat, Ramat Gan, New York, and other centers of Israeli commerce and intrigue is loud wailing and promises to "get even." And Kushner accuses the Palestinians of being "hysterical."

In fact, the Palestinians have been quite measured in response to Israel's overt and covert campaigns against them and their inalienable rights. Since Trump and Kushner launched their diplomatic, political, and economic warfare against Palestine, the State of Palestine has been recognized by the International Atomic Energy Agency and Colombia; Italy voted for a UN Security Council for a resolution that opposed the US movement of its embassy to Jerusalem; the UN's Group of 77 (G77) developing nations invited Palestine to chair the group's meeting during 2019; Spain's Josep Borell, who is pro-Palestinian and tough on Israel, was named the next Foreign Affairs Commissioner of the European Union; and former US President Jimmy Carter called on the United States to recognize Palestinian sovereignty. These small but significant advances on behalf of the Palestinians were achieved as a result of Palestine's commitment to diplomacy, not the hysteria practiced by Kushner and his friends in Israel, as well as by pro-Israel embeds found throughout the Trump administration.