"You gave me fortuneYou gave me fame
You gave me power in your own god's name
I'm every person you need to be"
- "Cult of Personality", Living Colour

In an extreme case of the cult of personality, the official state-issued biography of former North Korean dictator "Kim Jong-Il states that the Dear Leader does not answer to bowel movements like ordinary humans-in fact, he doesn't defecate or urinate at all." He is also said to have bowled "a perfect 300 in his first attempt at the sport". Another story says that he shot a hole in one at least five times during his first golf outing.

As Americans, we laugh at the fact that any of these tall tales are believed, but a significant minority in our own country behave the same way and accept Trump's every word as gospel. We do know for a fact that Trump visits the restroom, but according to the brand he has cultivated, he is otherwise infallible. He is a self-declared expert on the subject of any conversation and knows more than anyone else about everything from Senator Cory Booker (even more "than [Cory] knows about himself") to drones. His fans blindly follow along pretending that this is all normal and to question their own Dear Leader is to be unpatriotic. 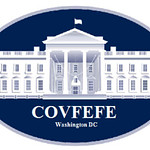 The Covfefe Presidency
(Image by Mike Licht, NotionsCapital.com)   Details   DMCA
Perhaps the strangest example of Trump's adherence to the principle that "it is less harmful to retain a formulation, even if it should not entirely correspond to reality, than by improving it" by "correct[ing] the error" occurred in the early morning hours of May 31, 2017. Ignoring the fact that a president's words can have life or death consequences, Trump sat with his phone angry tweeting: "Despite the constant negative press covfefe".

There are many plausible explanations for why Trump's thoughts were unfinished before heavy thumbs took over creating a meaningless word before the "send" button was pushed. As the holder of the most powerful office in the world, Trump could have been interrupted with an urgent update from one of the world's many hotspots. Perhaps his Big Mac did not settle correctly and he had to take an unscheduled visit to Walter Reed or maybe a dose of Adderall wore off and he just crashed. Instead of offering any explanation, Trump used the "I meant to do that" defense. His next Tweet asked: "Who can figure out the true meaning of "covfefe" ??? Enjoy!"

Two years later, Trump could not let go of his mistake. When the Daily Caller referred to covfefe as "President Trump's famous mistweet", the leader of the free world felt the need to respond: "Great! But how do you know it was a "mistweet?" May be something with deep meaning!" Always maintain the illusion that the Dear Leader never makes a mistake, especially a foolish one. Otherwise, the flock "might very well begin to question the legitimacy of the overall Trump mystique."

While Trump's lack of responsibility for a midnight Tweet made our country look foolish in the eyes of the world, at least no one's life has been threatened. Unfortunately, the same can't be said over the Hydroxychloroquine disaster. Despite studies showing that taking the drug as a treatment for COVID-19 can cause "psychiatric symptoms" along with "heart rhythm problems and other safety issues, including blood and lymph system disorders, kidney injuries, and liver problems and failure", Trump and his minions have continued to push the drug on the American people. This has continued even after the National Institute of Health found that
Hydroxychloroquine "was very unlikely to be beneficial to hospitalized patients with COVID-19" and "abandoned clinical trials of the drug." 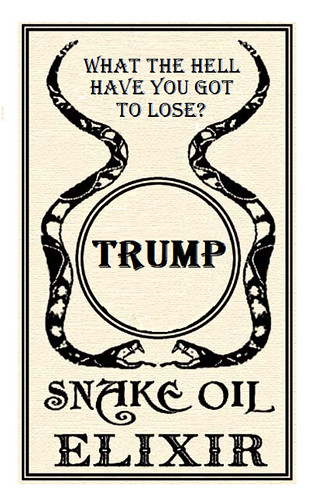 Trump Snake Oil
(Image by Mike Licht, NotionsCapital.com)   Details   DMCA
In addition to saving face after hyping a solution based on junk science and Fox "News" reports, Trump has another incentive for turning Hydroxychloroquine into a political issue: the government is now "sitting on 63 million doses of" the drug. This hoarding has caused real harm for those with lupus and rheumatoid arthritis who use the drug to "protect [their] immune system from attacking [their] own organs." The alternative for these patients is "to take stronger drugs to suppress their immune systems, [which] could render them susceptible to more serious consequences should they get COVID-19."

The Cult of Trump is so desperate to believe that he was correct in his original assessment that they will advance any "expert" who will agree, even if that "expert" has previously stated that "gynecological problems like cysts and endometriosis are in fact caused by people having sex in their dreams with demons and witches" and that "alien DNA is being used in current medical treatments and that there is demon sperm." Remember, when belief "comes into collision with exact science and research" one should be "unwilling to sacrifice so much as one little syllable of [ones] dogmas." This is true whether one is arguing climate change, evolution, or the usefulness of a drug.

Laugh all you want at the backwardness of the North Korean people, I am willing to bet 63 million doses of Hydroxychloroquine that if Trump were to announce that he longer needed an anus, 90% of the Republican party would believe him. They wouldn't even question how the Covfefe left his body.
________________________________
Carl Petersen is a parent, an advocate for students with special education needs, an elected member of the Northridge East Neighborhood Council, a member of the LAUSD's CAC, and was a Green Party candidate in LAUSD's District 2 School Board race. During the campaign, he was endorsed by the Network for Public Education (NPE) Action and Dr. Diane Ravitch called him a "strong supporter of public schools." Links to his blogs can be found at www.ChangeTheLAUSD.com. Opinions are his own.

Related Topic(s): Fascism-Cant Happen Here, Add Tags
Add to My Group(s)
Go To Commenting
The views expressed herein are the sole responsibility of the author and do not necessarily reflect those of this website or its editors.