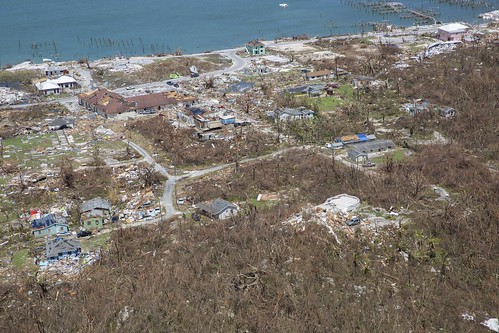 When the Duke of Windsor, the former Edward VIII, was made governor of the Bahamas in 1940, he and his wife Wallis Simpson arrived to peaceful islands favored by a benign climate, away from the violent upheavals of a war-torn Europe.

Whatever the reasons -- and many point to rising sea temperatures from climate change -- the climate in the Caribbean is a little less benign as the unfortunate residents of Cuba, Haiti and Puerto Rico among others have noticed in the last few years.

And now hurricane Dorian, a category 5 monster when it made landfall on the northern island of Abaco and Grand Bahama on Sunday. The strongest storm on record to hit the islands with winds reaching 185 mph, it left not a single roof untouched in Abaco, some areas being completely obliterated as if nothing had ever existed.

How many dead? Nobody knows yet. Shelters designed to accommodate a few dozen are crammed with a thousand and more. Sarah St. George, the chairman of the Grand Bahama Port Authority experienced it first hand. "Grand Bahama is not in good shape at all because 70 percent of it is under water." If water is up to the second floor, then people have lost everything. Recovery will be long and arduous.

The islands need help and is owed it. Mia Mottley the prime minister of Barbados put it bluntly: "We are on the front line of the consequences of climate change and we don't cause it." Climate experts predict worse and more frequent storms in the future. Dorian, for example, formed in August, earlier than normal. Global warming is playing havoc with weather and warmer seas fuel more moisture-laden, powerful storms.

Sea levels are rising from higher temperature expansion and greater ice melt, increasing the danger to coastal communities. In Greenland, the melting ice caps and sheets by a record amount have surprised researchers, who say this summer's melt has been enough to raise global sea levels by one millimeter. The ice sheet is 2-3 km thick and covers an area six times the size of Germany. If all that ice melted, it would raise sea levels worldwide by 7 meters or almost 23 feet.

When greenhouse gases are causing global warming, responsibility lies with the largest producers/polluters. Would an international court find them liable to the small island nations suffering the consequences? But then, if it does, who is going to persuade them to pay up?

It is in everyone's interest to reduce global warming and since the powers that be do not listen to us, 16-year old Greta Thunberg is doing something about it. To prove her point on greenhouse gases she refused to take a transatlantic flight, crossing on a sailboat instead to attend the United Nations climate summit later this month. While she gears up for it, she is also preparing for the global strike on Friday September 20th preceding the climate summit on the Monday following. She chose Friday, a workday, because she is asking adults to join the action and stay away from their jobs.

Of course UN climate summit reports try to achieve consensus and in doing so have to appease fossil fuel producers. If caveats are multiplied and uncertainties magnified, it is all part of the game.

Then there are the unexpected consequences. As electric cars multiply and the demand for copper escalates, new sources must be developed. Thus a new copper mine is being dug in the pristine wilderness of northern Norway, north of the Arctic Circle. How well will reindeer and their Sami herders coexist with copper mining in the sparse wilderness is an open question.

Arshad M Khan is a former Professor. Educated at King's College London, Oklahoma State University and the University of Chicago, he has a multidisciplinary background that has frequently informed his research. He was elected a Fellow of the (more...)
Related Topic(s): Activism; Climate; Copper; Hurricanes; Storms; Weather, Add Tags
Add to My Group(s)
Go To Commenting
The views expressed herein are the sole responsibility of the author and do not necessarily reflect those of this website or its editors.