Cross-posted from The Guardian
The subway is more than mass transit -- it's the city's very roots. The idea of the metro swamped by cold, salt water is unbearable 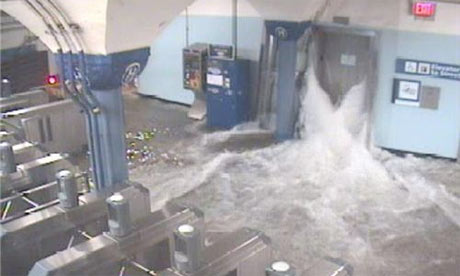 New York is the city I love best, and I'm trying to imagine it from a distance tonight. The lurid, flash-lit instagram images of floating cars in Alphabet City or water pouring out of the East River into Dumbo, the reports of bridges to the Howard Beach submerging and facades falling off apartment houses -- it all stings. It's as horrible in its very different way as watching 9/11.

But it's the subways I keep coming back to, trying to see in my mind's eye what must be a dark, scary struggle to keep them from filling with water. The tide at the Battery has surged feet beyond the old record; water must be pouring into every entrance and vent -- I hope some brave reporter is chronicling this fight, and will someday name its heroes.

For me, the subways are New York, or at least they're the most crucial element of that magnificent ecosystem. When I was a young Talk of the Town reporter at the New Yorker, I spent five years exploring the city, always by subway. This was in the 1980s, at the city's nadir -- the graffiti-covered trains would pause for half an hour in mid-flight; the tinny speakers would reduce the explanation of the trouble to gibberish.

It was how I traveled, though -- I didn't even know how to hail a cab. For a dollar, you could go anywhere. And my boast was that I'd gotten out at every station in the system for some story or another. It may not have been quite true: the Bronx is a big and forgotten place, and Queens stretches out forever -- but it was my aspiration.

The subways were kind of dangerous, but also deeply democratic. Writing about homelessness, I slept with hundreds of other men on the endless A train to the Rockaways. I convinced motormen to let me ride as they turned trains around through the City Hall station abandoned decades earlier. I hung out in the control room under Grand Central with its Hollywood array of levers and lights.

Imagining all that filled with cold salt water is too much.

I'm an environmentalist: New York is as beautiful and diverse and glorious as an old-growth forest. It's as grand, in its unplanned tumble, as anything ever devised by man or nature. And now, I fear its roots are being severed.

Bill McKibben is the author of a dozen books, including The End of Nature and Deep Economy: The Wealth of Communities and the Durable Future. A former staff writer for The New Yorker, he writes regularly for Harper's, The Atlantic Monthly, and The (more...)
Related Topic(s): Hurricane Sandy; New York City, Add Tags
Add to My Group(s)
Go To Commenting
The views expressed herein are the sole responsibility of the author and do not necessarily reflect those of this website or its editors.