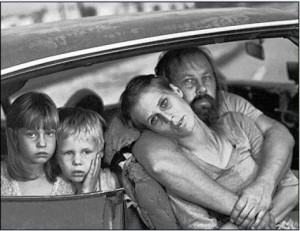 In New York, Wall Street financial institutions paid themselves $20.8 billion in cash bonuses last year while almost 120,000 men, women and children spent at least one night in a city shelter -- an all-time record. And that's just one city.

Each night, 45-million Americans go to bed hungry in this country, but that's not enough for the Neocons in Congress.

There were 225,000 foreclosure filings in February, but the Obama administration is abandoning its foreclosure prevention program promised during the campaign before it even got off the ground.

"Last summer, as President Obama's premier plan to save millions of Americans from foreclosure foundered, the administration tossed a new life preserver to homeowners.

"Officials unveiled a $1 billion program to offer loans to help the jobless pay their mortgages until they could find work again. It was supposed to take effect before the end of the year, but as of today, the program has yet to accept any applications.

"That could be an epitaph for the administration's broader foreclosure prevention effort, as tens of billions of dollars remain unspent and hundreds of thousands of homeowners have been rejected. Now the existence of the main program, the Home Assistance Modification Program, is in doubt.

"Saying it is a waste of money, the Republican-controlled House voted on Tuesday night to kill the foreclosure relief program. The Senate, which the Democrats control, will pursue a rescue. But Democrats, too, consider the program badly flawed."

We can bail out the banks and funnel obscene amounts of money to the Banksters and Big Corporations who profit on the weakened backs of our dwindling middle class, most of whom pay little or no income taxes -- but we cannot prevent American families from being forced to live in their cars?

Kathy never expected a career in radio as a talk show producer. Born and raised in Atlanta, Georgia, Kathy was completing her nursing degree when in 2001 - in an emergency - she was asked to fill in as the producer of Mike's program. Within a few (more...)
Related Topic(s): American_Apartheid; Americans Second; Banksters; Families; Foreclosure; Neocons, Add Tags
Add to My Group(s)
Go To Commenting
The views expressed herein are the sole responsibility of the author and do not necessarily reflect those of this website or its editors.