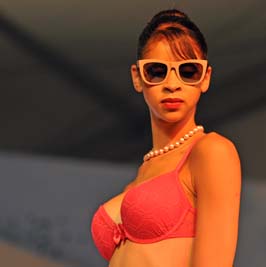 On the 50th anniversary of Woodstock where blue jeans and headbands were the rule of the day, a new uniform was in evidence at Lollapalooza: bralettes and short shorts. Girls by the thousands flocked to the annual four-day music festival in what those of use over 30 would consider...their underwear.

There they were on the streets, on the subway, on the sidewalks, insouciantly guzzling beer as if they weren't giving the dressed world an unexpected and, to some extent, unprecedented, peep show.

Sure "Daisy Dukes" date back to the 1980s when Catherine Bach sported them on the Dukes of Hazzard TV show. It was a fashion style once called "cheesecake." But then, the network made her wear flesh colored tights underneath the short shorts to cover her buttocks cheeks (and more). This year's Lollapalooza's participants even supplanted short shorts with thongs and G-strings.

Moreover Bach did not pair her Daisy Dukes with bralettes--the barely there bras which offer neither support or coverage and have helped to retire traditional bras. In fact Bach often covered her midriff and sometimes even wore sleeves. Go figure.

To those of us not wearing our underwear in public, what do these fashion trends mean?

Youth culture has always rested on conformity. Before black leggings took over in the late 1990s, no one (except your parents) would be seen in anything but blue jeans.

Women have the right to bare all in public and not be harassed by sexist men such couture announces. Moreover, if all young women bare all, why would one be singled out for harassment?

If the music, recreational drug use, sexual behavior and clothes of a younger generation don't shock the older generation, they are not doing their job.

Gen Z is the fattest generation in history with women harboring gigantic thighs, huge derrieres and protruding abdomens. Flaunting, not hiding, such obesity is a triumph of fat acceptance.

Related Topic(s): Bras; Culture; Fashion; Girls; Music; Music; Rebellion; Women; Woodstock, Add Tags
Add to My Group(s)
Go To Commenting
The views expressed herein are the sole responsibility of the author and do not necessarily reflect those of this website or its editors.