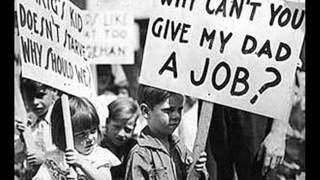 Coming soon to a city near you: scenes of a depression
(Image by YouTube, Channel: Jefferson1942)   Details   DMCA

On Thursday, April 2, the bottom fell out of the US economy, as the US Department of Labor reported that an unprecedented 6.6 million more workers in the US had been laid off and had filed claims for unemployment compensation payments with their state Unemployment Offices last week. That stunning news followed the already shocking news from last week that 3.3 million workers had lost their jobs and had filed for benefits the week before. This means that over the past two weeks, a total of 10 million workers - about 6.7% of the total US labor force - had filed for unemployment benefits in less than half a month.

We won't learn the real unemployment rate until early May because the BLS survey, based on polling of 60,000 workers, is done in mid-month so the figure of 700,000 layoffs for the mid-February to mid-March period doesn't include the tsunami of layoffs that just happened in the last two months of March, but we know it is happening because only a fraction of the US workforce is even covered by unemployment compensation insurance. Each state sets its own rules on which workers are eligible to be covered by the program and under normal circumstances, that ranges from a high of 50% of workers in Massachusetts to 10% of workers in North Carolina. The rest of the states fall somewhere in between, averaging at about a quarter of their workers being covered.

Currently, under a measure included in the $2.2-trillion pandemic stimulus bill just passed by Congress, eligibility for unemployment benefits has been expanded to include more workers who may not have worked enough quarters to qualify, and some gig workers who are normally not considered to be workers, but rather "independent contractors." So let's be generous and say that perhaps instead of the total number of workers being two times the number of "covered" workers in the US, it's going to be "just" 50% of the total. That would still mean that if 10 million workers covered by unemployment insurance had filed for benefits over the past two weeks, actually 20 million works were just fired or laid off from their jobs during that same time span.

Now, prior to that, the official unemployment rate over the last six months, before the arrival of the COVID-19 Coronavirus on US shores, had been running at about 3.6%, or about 5.8 millon workers. So if that rate were to move to 10%, it would mean that now over 17 million workers are jobless.

And that's based upon the so-called "official" U3 unemployment category used these days by the BLS - a deliberately misleading number that excludes anyone who is considered to be "not actively seeking employment," (meaning they hadn't actively applied for a job in four weeks). Basically, though, what is excluded from the statistic are people who are involuntarily only employed part time because of a lack of full-time jobs and people who want to work but after seeking a job for months unsuccessfully have given up the search. The U6 rate, often called the "real" rate, is typically double or more than double the U3 rate. So for example, in February, when the U3 unemployment rate was 3.6%, the U6 rate was 7.3%. Taking that as a standard, it suggests that the March U6 rate will likely be more on the order of 20%, which would mean about 35 million US workers are now jobless or working at part-time work when they want and need full-time employment.

While the corporate media typically just report the U3 number, economists generally pay more attention to the U6 number, as it represents the real share of the work force that has been unwillingly idled by employers.

Just to give a sense of what that number means: at the height of the so-called Great Recession, in 2008-10, the U6 rate hit a peak of 17% in March 2010 and then began to move back down as hiring began to pick up.

This 20% unemployment level that we're likely to actually having now, though, is at the start of the pandemic-caused economic collapse, though! It's going to go higher as things get predictably worse.

If that estimate of real unemployment as of the first week of April seems unbelievable, check out this article in today's New York Times by Justin Wolfers, an economist and public policy professor at the University of Michigan, who recons that unemployment is currently around 13%, and possibly as high as 15%. If there is no hiring currently going on as there normally is even during a recession, which could be the case in this unusual crisis, given the speed of the collapse and the fact that most employers who might want to hire may want to adopt a wait-and-see attitude to get a sense of where things are headed before bringing more people onto the payroll, I would argue that Wolfers' estimates are too conservative.

As the pandemic, still in its early stages in most parts of the country, keeps accelerating its spread, increasing numbers of states are joining states like New York, California and Pennsylvania in locking down their homes, schools and all but "essential" businesses adding new waves of the jobless. Economists at the Federal Reserve System are predicting now that unemployment by this summer could reach 32%, representing 47 million workers, or nearly one-third of the total US labor force out of work (165 million, counting part-time and gig workers). Since the record unemployment rate reached during the Great Depression was 24.9 percent reached in 1933, this means that by this summer, if the Fed's economists are correct, the US will have nearly 50% higher unemployment than our grandparents experienced during the Great Depression- an era that saw hunger, breadlines, was bankruptcies and foreclosures, and Dickensian conditions that we modern-day Americans have long thought of as almost inconceivable.

The fantasy held by many in government today, and in the media and public at large, at least so far, is that even if this awful situation comes to pass, jowill be short-lived. The pandemic will end or wind down, perhaps over the summer or by the end of the year, this story goes, and the economy will bounce back as soon as people can leave their imposed isolation, businesses will rehire the laid-off workers, and everything will return to normal.

But that scenario is actually very unlikely. Just think about it for a moment. The nearly 50 million people who are laid off, -- only half of whom will be receiving meager unemployment benefits of, at a maximum, just $600 a week -- will be unable to buy food for their family, pay their rent or mortgage bills, student loans, car payments and medical expenses - especially medical expenses in the case of the 87 million who have either no insurance or only crummy insurance with obscenely high deductibles and co-pays. Even if Congress or state governments mandate moratoriums on rent and/or mortgage payments for a few months, those bills will not be waived, just delayed, meaning people would be anticipating having to catch up and pay them later, so spending is going to dry up. Already car sales are cratering. After all, who's going to go out and buy a new car or truck with all this economic uncertainty ahead?

And if even people who need a new car aren't buying one, what about less essential items like new clothes, home appliances, home remodeling projects, plans to go to college, vacation trips, small business investment, new home construction, etc., etc.? in this economy where nearly 80% of the nation's Gross Domestic Product is based upon consumer spending, how will companies survive if nobody's buying? Already Macy's is going bust. Will Sears, JC Penny's, Lord & Taylor and Home Depot be far behind? Already I drive past shopping malls whose parking lots were jammed with vehicles all day and evening just a few months ago, and they are not only now devoid of cars, but the signs are coming down off the fronts of the buildings. That is to say, big chains are shutting stores for good. Independent businesses, like restaurants, hardware stores, shoe stores, card shops, hair salons and the like will be especially hard hit since their owners usually have no ability to ride out months of no customers.

You cannot just expect these kinds of things to bounce back. Once they're gone, they're gone, whether it's the local "Mom's Diner" or the Ford Motor Company.

Related Topic(s): Corona Virus Coronavirus Covid-19; Depression; Pandemic; Recession; Thiscantbehappening, Add Tags
Add to My Group(s)
Go To Commenting
The views expressed herein are the sole responsibility of the author and do not necessarily reflect those of this website or its editors.