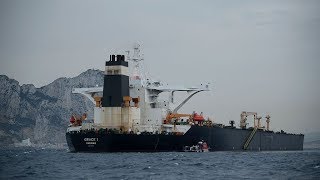 Hubris is usually a forewarning of impending calamity. Extreme arrogance blinds the hubristic person to the limits of their power. So, blindly, they push on with reckless excess, leading to potentially disastrous results.

The US and Britain are exemplars of this kind of mad hubris in the present mounting tensions with Iran.

After Iran seized a British cargo ship this week in the Persian Gulf, Britain's foreign secretary Jeremy Hunt condemned the Iranian action as "unacceptable" and warned that Tehran is "choosing a dangerous path."

American President Donald Trump also rebuked Iran. "We have the greatest ships the most deadly ships, we don't want to have to use them," he said to reporters Friday at the White House. "We hope for their [Iran's] sake they don't do anything foolish. If they do, they will pay a price like nobody's ever paid."

Britain is claiming that Iran's impounding of a British-operated ship is unlawful and violates "freedom of navigation." Iran said it seized the vessel after it collided with an Iranian fishing boat and disobeyed safety regulations for passing through the narrow Strait of Hormuz.

Whatever the exact circumstance are, London has very little legal or moral authority to remonstrate with Iran. Tehran says it is carrying out an investigation into the alleged infringement by the British ship. Iran has the sovereign right to do so.

As for the official British reaction, it smacks of downright hypocrisy. An Iranian oil tanker is currently detained in the British overseas territory of Gibraltar after Royal Marines boarded the vessel on July 4 and took it into custody over claims it was transporting oil to Syria allegedly in breach of European Union sanctions on Damascus.

Iran slammed that British seizure as "piracy" and disputes the legality of Britain's motives. There are good grounds to believe that Britain's actions were conducted in league with Washington to deliberately aggravate Iran.

What's good for the goose is good for the gander. If the British apply "laws" on alleged shipping transgressions by Iran, then Tehran has every right to do likewise on suspected British ships in or near its territorial waters in the Persian Gulf.

The arrogance of Britain and the US is astounding. Hypocrisy and double standards are tumbling over themselves.

Washington and London's accusations that Iran is "escalating" tensions are an absurd inversion of reality. Iran's foreign minister Mohammad Javad Zarif just this week requested the US to enter negotiations to resolve the stand-off if Trump reciprocated by lifting harsh sanctions off Iran. You can't get fairer than that.

Let's recall the bigger picture. The dangerous situation has been created by Washington's reprehensible tearing up last year of the international nuclear accord with Iran. Then in April, Trump reimposed crippling sanctions on Tehran driving the Iranian economy into even further turmoil. Such economic warfare is illegal under international law. It's "economic terrorism," as Iranian-American writer Soraya Sepahpour-Ulrich aptly puts it.

Related Topic(s): Arrogance; Bullying; Hubris; Hypocrisy; Iran; Military; Trump, Add Tags
Add to My Group(s)
Go To Commenting
The views expressed herein are the sole responsibility of the author and do not necessarily reflect those of this website or its editors.