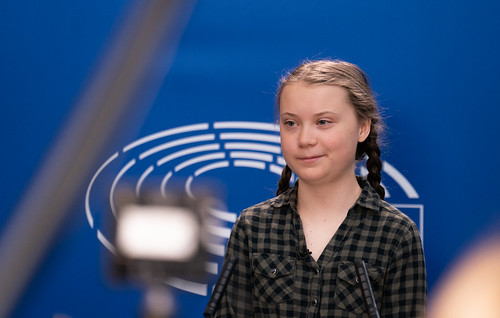 In Greta Thunberg's moving speech on climate change and the need to change the human-made systems that are causing climate chaos, she addresses the state of the world's willing ignorance. She asks, if we all know of this existential threat, why is no one talking about it?

The problem with addressing such a nebulous and catastrophic issue is not in finding solutions or researching the problem more, it's in getting people to care and act. Whether it be individual action or creating demand for systemic change, the reason we can't get people to care and act now is because of distractions. Climate change isn't the only result of this failing system- in the midst of a public health crisis, increasing poverty and hunger, water shortages, police violence, and a host of other stressors, how should people be expected to bear these and the constant thought of the world becoming uninhabitable?

The need to push climate change aside has caused problems, but environmentalists must recognize its validity, as well as the privilege it takes to be able to worry about far off (albeit important) issues instead of worrying about immediate, everyday ones. Not to mention- low-income folks consistently use fewer resources than the rest of the country, so low-income folks should bear the least weight of this issue. (Despite this, studies have shown that low-income and undocumented folks care the most about environmental sustainability!)

So how do we get past this? How do we get people outside of their day-to-day, and address the issue of climate change without slipping into an existential dread that no one has time for?

It should start by finding a new way of approaching the issue. Right now, individual action is heavily emphasized by American environmentalists and corporations, pushing the narrative that if you buy the right products and create less personal waste that climate change can be solved- this is not true. This is a failing system, where everything is connected. We cannot expect individual change to solve a global problem, where 100 American corporations are responsible for 71% of climate change and the US military is one of the world's largest polluters. This places a burden on the American public that is also dealing with all the other problems in the world. We need to focus on which aspects of this political-economic system are failing and change them. As the Climate Justice Alliance puts it, system change is inevitable, but a just system change is not.

It's getting time to focus on how these changes will be equitable, will solve the root of the problem and not only serve as a bandaid, and will create a future that can self-sustain. The disproportionate effects of climate change on the Global South, poor, and people of color are not being addressed in the mainstream, but they are people's lived experiences, and finding a way to mitigate climate change systemically and equitably needs to be addressed.

No one wants to think about system failure and climate chaos. These issues are unavoidable, but the human brain is growing in its ability to process negative information. To better fit these issues into your consciousness, think about where you fall in these systems- how much are you actually responsible for? At every level of government, what type of change would you like to see? What type of world do you see for our future generations?

Now work for that future.