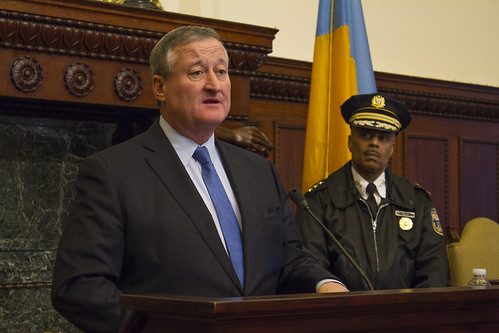 Phila. Mayor Jim Kenney
(Image by PHL Council)   Details   DMCA
>
First, let us examine for a moment: what is the reality of life in inner city Philadelphia, under the posh elitist corporatized exterior that will be on display and televised during the July Convention? A shameful picture, indeed....
From Chris Hedges' excellent article, Shut Down the Democratic National Convention, Hedges quotes activist Cheri Honkala:

"Philadelphia has a poverty rate of 26 percent. It has the highest number of people who die from drug overdoses in the country. The city has not housed anyone within the homeless population within 10 months. It has lost its state certification for the Department of Human Services child protection agency because of gross negligence and substandard conditions for children. Foster kids are stuck in an abusive system. Hundreds are not being placed.
And at the same time, the city will spend $43 million on security for the convention. It will spend upwards of $60 million to house millionaires and billionaires while it ignores the vulnerable and attempts, by denying us a permit to march, to render them invisible."
"We don't have any choices anymore. I have been doing this work for almost 30 years. In the documentary made about our march during the Republican National Convention in 2000, there are eight people in the film that are now dead. The poor live in a war zone.
I do not know if my kid will get to school or come back alive, and even if he has a school to go to, because they are talking about closing down more schools. We either do everything we possibly can to build an independent political party, or we will have to organize the next American Spring. The poor are barely surviving. The planet as we know it may soon not be in existence. Across the street from where I live, five people were shot, all on the same day. Three of them were teenagers who died. Our kids are exploitable or expendable."