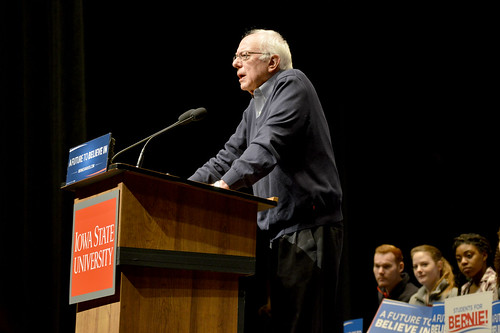 Next time someone who believes that Medicare-for-All would be a bad thing argues with you, you can take a few talking points from Bernie Sanders' " OPTIONS TO FINANCE MEDICARE FOR ALL" from his website, or find them here:

OPTIONS TO FINANCE MEDICARE FOR ALL

Today, the United States spends more than $3.2 trillion a year on health care. About sixty-five percent of this funding, over $2 trillion, is spent on publicly financed health care programs such as Medicare, Medicaid, and other programs. At $10,000 per person, the United States spends far more on health care per capita and as a percentage of GDP than any other country on earth in both the public and private sectors while still leaving 28 million Americans uninsured and millions more under-insured.

Today, health care spending in the U.S. accounts for nearly 18 percent of our Gross Domestic Product (GDP) and is on track to total over 20 percent of GDP over the next decade. It is projected that if we do nothing and maintain our current dysfunctional system that we will spend $49 trillion over the next decade on health care. That would be an incredible burden on businesses, working families, and the entire economy.

The most cost-effective and popular solution to this health care crisis is to guarantee health care as a right through a Medicare-for-all single-payer health care system.

Today, the traditional Medicare program only spends two percent of its costs on administration. That's less than one-sixth the administrative costs of private health insurance companies.

Studies have found that our federal government could save up to $500 billion per year on administrative costs by moving to a Medicare for All, single-payer health care system.

Moreover, the United States pays, by far, the highest prices in the world for prescription drugs because Congress has done nothing to regulate the price of medicine. If the U.S. joined the rest of the industrialized world and negotiated with the pharmaceutical companies to lower prices, our country could save up to $113 billion per year.

As the wealthiest country in the world, we have a variety of options available to support a Medicare for All single-payer health care system that guarantees high quality, affordable health care as a right, not a privilege, to every man, woman, and child in this country. This paper explains just some of the policies that could provide revenue to finance Medicare for All. Under every single one of these options the average American family will save thousands of dollars a year because they will no longer be writing large checks to private health insurance companies.

If every major industrialized nation on Earth can make health care a right, provide universal coverage to all, achieve far better health outcomes in terms of life expectancy and infant mortality, while spending far less per capita than we do, it is absurd to suggest the United States of America, the wealthiest nation in the history of the world, cannot do the same.

In my view, there needs to be vigorous debate as to the best way to finance our Medicare for All legislation. Unlike the Republican leadership in Congress which held no hearings on their

disastrous bill which would have thrown 32 million off of health insurance and dealt with one- sixth of the American economy, it is our intention to get the best ideas we can from economists, doctors, nurses, and ordinary Americans. Below are a number of options to begin that discussion. Under each and every one of these options the average American family will end up in a better financial position than they are under the current system.

Related Topic(s): Bernie Sanders; Finance; Medicare For All, Add Tags
Add to My Group(s)
Go To Commenting
The views expressed herein are the sole responsibility of the author and do not necessarily reflect those of this website or its editors.