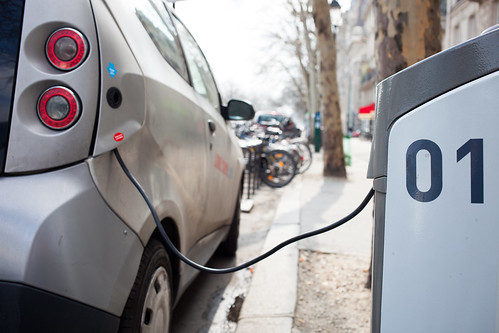 The United Kingdom, which is already world famous for its green gardens and even greener countryside, is about to get even greener. That's because according to a new report from Japanese car maker Nissan, it could soon have more electric car charging stations than traditional gas stations.

Once again our European friends are leaving us in the dust.

With about 12 gas stations for every one electric charging station, it's going to take a long time for the United States to catch up with the United Kingdom's all-out embrace of the electric car revolution. So why is that?

Why does our green infrastructure consistently lag behind that of other developed countries like the UK, Germany or Denmark, which is leading the way in wind power generation? Well, there's really no simple answer to that question, but let me try.

The fact that we have such pathetic green infrastructure is in part due to the fact that our utility companies are privatized -- and therefore out of the hands of We the People. They're beholden only to their own profit motive, and not to the interests of our planet or the customers they serve.

If the opposite were the case and our utility companies were nationalized, or at least controlled by local cooperatives, things would be very, very different. We could direct them to source their power from renewable sources like wind and solar, and not just super-profitable fossil fuels (which, by the way, are only profitable because of enormous tax loopholes and the billions of dollars they get in government subsidies).

But our privatized electric infrastructure isn't the only reason the green revolution has been stunted here in the US.

The other major reason we lag behind Europe and other developed regions of the world when it comes to embracing green technology is the simple fact that we have oligarchs working hard to ensure that we remain obedient to the status quo. These oligarchs work in tandem with private utility companies, and they are the main obstacle to a greener future here in the US.

Not surprisingly, Charles and David Koch -- the Koch brothers -- are a major force in this network of oligarchs. For example, as Rolling Stone reported recently, they are working hard to kill net-metering standards in states all across the country.

Net-metering is the technical term for the process by which people who have solar panels on their house can sell some of the excess power they generate back to the grid at a premium price or for credit. It's been a key factor in the growth of the solar industry in states like Florida because it helps balance out the cost of installing solar panels and creates a built-in incentive for renewable power. It's also how Germany went from virtually no solar power to nearly 100 percent solar power on some days this summer with millions of home and office rooftop solar units feeding the German power grid.

Net metering is working all over the world!

This, of course, is probably why the Kochs want to kill it -- they have massive investments in the fossil fuel industry, and anything that would encourage the development of alternative fuel sources is a threat to their bottom line.

This is probably the same reason why the Kochs have also thrown their money behind the new fossil fuel propaganda group Fueling US Forward, which was unveiled this weekend at the 2016 Red State Gathering in Denver, Colorado. As DeSmogBlog reports, Fueling US Forward's entire purpose is to destroy subsidies that help encourage the growth of the electric cars, which could also represent a direct threat to the Koch Industry's bottom line.

Related Topic(s): Electric Cars; Green Energy; Infrastructure; Solar Power, Add Tags
Add to My Group(s)
Go To Commenting
The views expressed herein are the sole responsibility of the author and do not necessarily reflect those of this website or its editors.