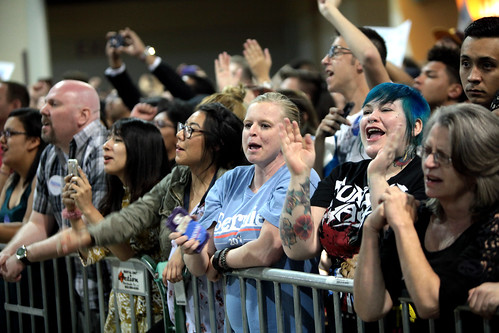 ­IT MADE FOR a tough juxtaposition. Late Monday night, CBS News reported that Bernie Sanders had just done exactly what many critics have long called on him to do: He asked his supporters to dial back the personal attacks on rivals in the Democratic primary and focus on substantial policy differences.

"We need a serious debate in this country on issues," Sanders said. "We don't need to demonize people who may disagree with us. ... I appeal to my supporters: Please, engage in civil discourse." He pointed out (rightly) that "we're not the only campaign that does it. Other people act that way as well." But he added, "I would appeal to everybody: Have a debate on the issues. We can disagree with each other without being disagreeable, without being hateful."

Then, early the following morning, the Hollywood Reporter sent out a press release about its new cover story with the subject line: "Hillary Clinton on 2016, her new doc and Bernie: 'Nobody likes him.'"

Inside were excerpts from a stunningly destructive interview in which Clinton obsessively picks every scab of the 2016 primary race and refuses to say that she would endorse Sanders if he wins the nomination, the very thing establishment Democrats falsely claim that Sanders did in 2016 (in fact, as the New Yorker reported, he campaigned tirelessly for her, sometimes doing three events a day).

Within seconds, that 2016 primary feeling flooded my bloodstream. Screw what I had planned for the morning none of it felt as important as firing off a volley of rage tweets about Clinton, her staggering absence of self-awareness, and her outrageously revisionist history.

But I did something else instead. I blocked Twitter, chatted with my son about why he's such a Bernie fan ("He will beat Donald Trump"), and started writing about being on the Sanders campaign trail in Iowa and New Hampshire over the last couple months. Because among Sanders's steadily growing base of supporters, the mood is about as far from rage tweeting as you can get. In fact, despite the senator's reputation as a finger-waving grump, the more time I spend with the campaign, whether in small meetups or huge rallies, the more I am struck by the undercurrent of tenderness that runs through all these events. Surprisingly enough, the force that is bridging what at first seem like huge divides between multiracial urbanite Gen Z-ers and aging white farmers, between lifetime industrial trade unionists and hardcore climate organizers, between a Jewish candidate and a huge Muslim base is a culture of quiet listening.

Related Topic(s): Bernie Sanders Presidential Campaign; Individualism; Rallies; Solidarity; Supporters; Trump Bigotry; Trump Racism; Trumpism, Add Tags
Add to My Group(s)
Go To Commenting
The views expressed herein are the sole responsibility of the author and do not necessarily reflect those of this website or its editors.