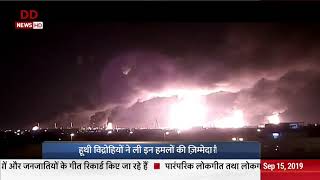 In many ways it doesn't really matter who -- Houthis in Yemen? Iranians? Shiites in Iraq? -- launched those missiles and drones at Saudi Arabia. Whoever did it changed the rules of the game, and not just in the Middle East. "It's a moment when offense laps defense, when the strong have reason to fear the weak," observes military historian Jack Radey.

In spite of a $68 billion a year defense budget -- the third highest spending of any country in the world -- with a world-class air force and supposed state-of-the-art anti-aircraft system, a handful of bargain basement drones and cruise missiles slipped through the Saudi radar and devastated Riyadh's oil economy. All those $18 million fighter planes and $3 million a pop Patriot anti-aircraft missiles suddenly look pretty irrelevant.

This is hardly an historical first. British dragoons at Concord were better trained and armed than a bunch of Massachusetts farmers, but the former were 5,000 miles from home and there were lots more of the latter, and so the English got whipped. The French army in Vietnam was far superior in firepower than the Viet Minh, but that didn't count for much in the jungles of Southeast Asia. And the US was vastly more powerful than the insurgents in Afghanistan and Iraq, but we still lost both wars.

The Sept. 14 attack on Saudi Arabia's Aramco refineries at Abqaiq and Khurais did more than knock out 50 percent of Saudi Arabia's oil production, it shook the pillars of Washington's foreign policy in the region and demonstrated the fragility of the world's energy supply.

Since 1945, Washington's policy in the Middle East has been to control the world's major energy supplies by politically and militarily dominating the Persian Gulf, which represents about 15 percent of the globe's resources. The 1979 Carter Doctrine explicitly stated that the US reserved the right to use military force in the case of any threat to the region's oil and gas.

To that end Washington has spread a network of bases throughout the area and keeps one of its major naval fleets, The Fifth, headquartered in the Gulf. It has armed its allies and fought several wars to ensure its primacy in the region.

And all that just got knocked into a cocked hat.

Washington blames Iran, but the evidence for that is dodgy. The Americans have yet to produce a radar map showing where the missiles originated, and even the Trump administration and the Saudi's have scaled back blaming Teheran directly, instead saying the Iranians "sponsored" the attack.

Conn M. Hallinan is a columnist for Foreign Policy In Focus, "A Think Tank Without Walls, and an independent journalist. He holds a PhD in Anthropology from the University of California, Berkeley. He oversaw the (more...)
Related Topic(s): Houthis; Iran; Oil Crisis Global Disruption; Pentagon; Saudi Oil Facility Attacks, Add Tags
Add to My Group(s)
Go To Commenting
The views expressed herein are the sole responsibility of the author and do not necessarily reflect those of this website or its editors.