Donald Trump castigates the media at every opportunity, calling them "fake news" and "enemy of the people," but in reality, they are his best friends and most effective promoters.

Somehow his approval rating remains stable, despite his lies, divisive speeches and all the insane nonsensical garbage he spews out. He is still able to draw enthusiastic, adoring crowds and keep the nation's attention squarely focused on him.

How is his popularity sustained? Why hasn't he been knocked off his pedestal? Why did millions of Americans vote for many of the senate candidates he campaigned for in the mid-terms? The answer, I believe, is the way he is treated by the corporate news media. These ratings-driven media companies allow Donald Trump to dominate their coverage. They breathlessly cover everything he does or says. The president is able to fabricate reality and go on bizarre, incendiary rants--and totally get away with it.

Things may change now that Democrats control the House, but for the last two years the opposition party didn't seem to exist. Oh, they were out there, pointing out the absurdity and danger of the president's tweets and policies. Yet, with minimal coverage from the news media, they might as well have been talking into the wind. Where were Democratic leaders and prominent office-holders, like Chuck Schumer, Nancy Pelosi and Elizabeth Warren? They were around, of course, but Trump has been just plain irresistible to the news media. He sucks up all the air, leaving Democrats on the outside looking in. 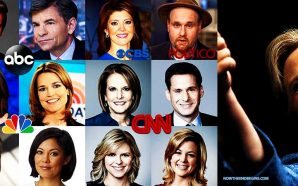 Donald Trump enjoys extraordinary luck and political savvy and knows how to play the media like a violin virtuoso. Everything he says is treated like an important presidential pronouncement, when in fact they are truly infantile, unhinged, ill-informed blather, if not downright lies (what's the latest count from the Washington Post, 6000-plus?). Unfortunately millions of Americans believe he knows what he is talking about and await his daily diatribes as if they were important proclamations.

Being that he is the President of the United States, Trump deserves to be heard. But the corporate news media can give him sufficient coverage without overwhelming the viewers, and allow some time for other points of view. As it stands now, he is receiving millions of dollars in free, mostly unchallenged advertising for his likely 2020 run for re-election.

There is no doubt Donald Trump is a media dream, pulling in phenomenal ratings. People love or loathe everything he says and does, and will continue paying attention. But the corporate news media needs to pay attention to the cost to the country. If there is still such a thing as corporate responsibility, they will realize their over-the-top coverage of President Trump only helps him destroy the underpinnings of our democracy and turn Americans against each other.

The corporate news media has a responsibility to treat President Trump as they have previous presidents and other influential political leaders. That is, not allow him to totally dominate the news coverage, and to allow the opposition some rebuttal time.

It's way past time to level the playing field.