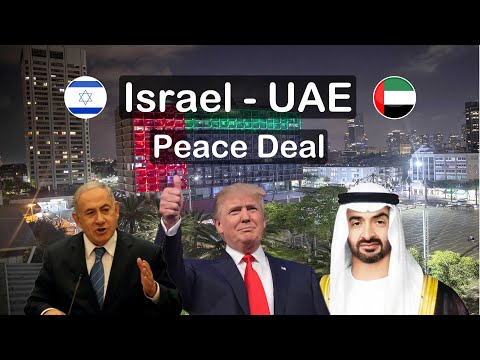 Much of the diplomatic world has gone gaga over the 13 August 2020 "normalization" of relations between Israel and the United Arab Emirates (UAE), facilitated by years of encouragement coming out of Washington.

In truth this is but a quasi-new relation, because "Israel and the UAE have been cooperating and normalizing relations -- under the table for many years." The UAE's agreement to the public upgrading of this relationship was reportedly made in exchange for Prime Minister Netanyahu's "suspension of plans to annex parts of the West Bank." We can now update the old warning to beware of Greeks bearing gifts -- beware of Zionists offering compromise.

Though the Israeli Prime Minister's suspension of annexation is hailed as a major compromise on the part of Israel, it is more illusory than real. Both the Palestinians and Netanyahu himself pointed out -- that the suspension is not seen as a permanent one. The Palestinians and their supporters also quickly pointed out that this agreement changed nothing in terms of Israel's illegal behavior on the ground -- particularly the de facto annexation represented by the continuing encroachment of Israeli settlements. Under these circumstances, the agreement actually registers the UAE's acceptance of this criminal state of affairs. The Palestinian spokesperson Hanan Ashrawi put it succinctly: "May you never be sold out by your 'friends.' I srael got rewarded for not declaring openly what it has been doing to Palestine illegally & persistently since the beginning of the occupation."

Despite the fact that the change from informal relations to something more official and public meant little change on Israel's part, the leaders of the Zionist state, the U.S., and the UAE were determined to present the event in a way that would convince both themselves and others that something momentous had been realized.

The joint statement coming from the three governments celebrated a "historic diplomatic breakthrough." Netanyahu asserted that the agreement marked "a new age -- in Israel's relations with the Arab World." He expected to see more Arab states follow the UAE's lead. And, indeed, it looks like the disreputable dictatorship in Bahrain might be the next in line.

President Trump framed the event this way, "By uniting two of America's closest and most capable partners in the region" something which his egocentric worldview drove him to insist only his administration could do "this deal is a significant step towards building a more peaceful, secure, and prosperous Middle East." Trump's National Security Advisor Robert O'Brien expressed his opinion that the deal should "solidify a Nobel Peace Prize nomination for Trump." That would, potentially, put Trump right up there with the ignominious Henry Kissinger.

The Democratic Party candidate for president, Joe Biden, immediately gave his approval. "The UAE's offer to publicly recognize the State of Israel is a welcome, brave, and badly-needed act of statesmanship. ... A Biden-Harris administration will seek to build on this progress, and will challenge all the nations of the region to keep pace."

Others soon chimed in:

Egyptian military dictator Abdel Fattah El-Sisi told us "This step will bring peace to the Middle East. We appreciate the efforts of those in charge of this agreement in order to achieve prosperity and stability for our region."

Germany's Foreign Minister Heiko Maas: Germany welcomed the "historic" deal between Israel and the United Arab Emirates. The normalization of ties between the two countries "is an important contribution to peace in the region."

Besides the Palestinians, there were only a few others who saw through the facade. Iran labeled the agreement as a betrayal of the Palestinian cause. "The oppressed people of Palestine and all the free nations of the world will never forgive the normalizing of relations with the criminal Israeli occupation regime." Turkey's reaction was similar: "Neither history nor the collective conscience of the region will ever forget and forgive the hypocritical behavior of the UAE, which is trying to depict the deal as a sacrifice for Palestine, when in reality it is a betrayal to the Palestinian cause for its own narrow interests."

I think Iran and Turkey are correct in their reaction to what is certainly a betrayal. However, I am not sure of the "never forgive" part, keeping in mind the fact that collective memories have, historically, proved fickle. Nonetheless, if anything, these two critical countries did not go far enough in their condemnation. This is so because the Israel-UAE deal is a betrayal of more than the hopes for justice and a better future of oppressed peoples. This bilateral agreement, whether it spreads to the rest of the Arab world or not, is nothing less than the forsaking of the world's prospects for more civilized and humane international relations.

Related Topic(s): Arab; International News; International Politics; Israel; Palestinian; Peace; Zionists, Add Tags
Add to My Group(s)
Go To Commenting
The views expressed herein are the sole responsibility of the author and do not necessarily reflect those of this website or its editors.