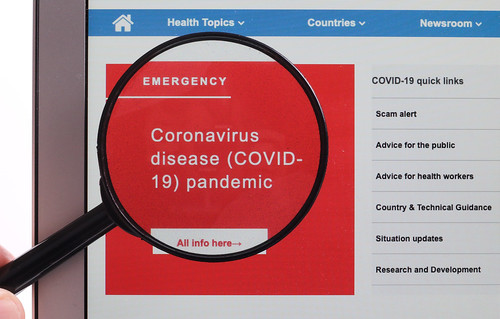 WHO website with magnifying glass
(Image by focusonmore.com)   Details   DMCA

On April 14, 2020, U.S. President Donald Trump addressed a news conference at the White House, where he said that his administration would "halt [all] funding" for the World Health Organization (WHO). The WHO, founded in 1948, is the principal United Nations agency tasked with the improvement of the health of the world; it is also widely acknowledged as an agency that is best suited to deal with health emergencies.

On March 11, a month before Trump's announcement, the WHO had declared a global pandemic as a result of its deep concern of both the alarming levels of spread and severity, and the alarming levels of inaction. Up to this April, this highly infectious virus has sickened at least 2 million people and killed 183,000 people around the globe. The number of people who have died in New York City -- Trump's hometown -- from the novel coronavirus outbreak is far higher than that of 9/11. To cut funding to the only agency able to coordinate the global response drew a sharp intake of breath from people around the world.

Why would Trump withdraw $400 million -- 15 percent of the WHO budget -- in the midst of a crisis that does not seem ready to abate? Trump's answer is that the WHO "failed in this basic duty" by "severely mismanaging and covering up the spread of the coronavirus." It is essential to detail why Trump's accusations against the Chinese government and the WHO are wrong, starting with why Chinese authorities learned about the coronavirus, and how the WHO and the Chinese authorities named and shared information about the virus.

Doctors in Wuhan observed an unusual kind of pneumonia in late December. On December 31, a high-level team arrived from Beijing to investigate the reports coming from the hospitals. That day, on the last day of 2019, the Chinese authorities informed the Beijing office of the WHO of "cases of pneumonia unknown etiology [medical term for cause]."

On January 2, according to the WHO's situation report, "the incident management system was activated across the three levels of WHO (country office, regional office and headquarters)." Four countries had by January 20 reported incidents of what would later be known as COVID-19 -- China, Thailand, Japan, and South Korea. Six people had died in Wuhan City.

On January 4, the WHO announced publicly that the Chinese authorities had informed it of "a cluster of pneumonia cases -- with no deaths -- in Wuhan." This was also reported by the WHO on its official Twitter account. The next day, on January 5, the WHO published its first risk assessment. "There is limited information to determine the overall risk of this reported cluster of pneumonia of unknown etiology," the WHO wrote. "The symptoms reported among the patients are common to several respiratory diseases, and pneumonia is common in the winter season; however, the occurrence of 44 cases of pneumonia requiring hospitalization clustered in space and time should be handled prudently."

It is important to know that the population of Wuhan City is roughly 11 million and of Hubei Province is roughly 58 million. The 44 cases of what was then called pneumonia were of concern, but there was not -- at that time -- an imperative to sound a global alarm.

A virus provokes alarm if it can be proved that it moves from an infected human to another human being. This was not clear to either Chinese authorities or to the WHO until January 20.

The first official statement that verified human-to-human transmission was made on January 20 by China's leading respiratory disease expert, Zhong Nanshan. The next day, the National Health Commission reported that the novel coronavirus was a Class B infectious disease and that Class A methods of prevention had to be adopted.

With this notification, everything changed. On January 23, Wuhan was shut down, and the Chinese government operated on an emergency basis.

Related Topic(s): China; Coronavirus Federal Government Response; Funding; Health; Trump; World Health Organization - Who; World Leaders, Add Tags
Add to My Group(s)
Go To Commenting
The views expressed herein are the sole responsibility of the author and do not necessarily reflect those of this website or its editors.