Thanksgiving is the perfect time to remember what goes into making our food. 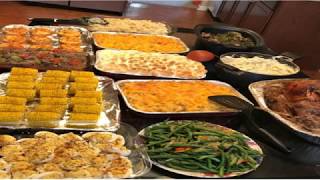 Thanksgiving -- let's eat! America's most food-focused holiday traces its roots back to the abundant feast that Pilgrims and Native Americans enjoyed together in the fall of 1621.

Not even half of the 100 or so Mayflower Pilgrims and crew who'd arrived at Plymouth Rock the previous December survived their first, grim year in the New World ("new," of course, only to those undocumented immigrants -- not to the local citizens). Still, to celebrate and offer thanks for their survival, the English migrants planned a communal meal following the fall harvest. And in appreciation to the Wampanoag for teaching them to raise corn and gather the region's seafood, they also invited Massasoit, the tribe's leader, to join them. He did, surprising the hosts by arriving with 90 members of his community. But they didn't come empty-handed, instead bringing much of the fare for what became a sumptuous, three-day banquet featuring venison, duck, geese, wild furkees (Wampanoag for gobblers), eels, mussels, lobster, gooseberries, plums, cornmeal pudding, popcorn balls (who knew!), barley beer and fortified wine. And you thought you overate at Thanksgiving!

But this was not the first precursor of our annual November food-a-palooza. Texans assert the tradition began near El Paso in 1598, when the Manso and Piro tribes roasted fowl and fish for a lost and bedraggled group of Spanish colonizers. Floridians insist that the firstest-of-all Thanksgiving was in 1565, when the Timucuans shared a stew of salt pork and garbanzo beans with Spanish settlers at St. Augustine.

Interesting tidbits, but today, the big question is not who held the first celebratory feast of thanks, but what exactly we're celebrating. America certainly has an abundance of food (even though many Americans do not), yet we face a momentous choice: A food future rooted in the ethic of sustainable agri culture or in exploitative agri-industry.

The conglomeratized, Wall Streetized, monopolized, globalized, chemicalized and plasticized model of treating dinner as just another manufactured product is presently dominant. Big Food has gained this control, not because its product is superior, but because, for the past 70 years, the corporate powers have ruthlessly abused their financial, marketing and political muscle to bully and shove aside anyone in their way.

What better symbol of Agri-Industry's vision of "food" than that ubiquitous Thanksgiving Butterball turkey. In a succession of corporate deals, the brand has passed from Swift and Co. to ConAgra to Smithfield Foods and now to shipping giant Seaboard Corporation. Whatever its industrial flag, the Butterball has been hoisted onto our tables by huge advertising budgets and promotion payments to supermarkets. The bird itself has been grotesquely deformed by industrial geneticists who created breasts so ponderous that the turkeys can't walk, stand or even reproduce on their own (thus earning the nickname "dead-end birds"). Adding torture to this intentional deformity, the industry sentences them to dismal lives in tiny confinement cages inside the sprawling, steel and concrete animal factories that scar America's rural landscape -- monuments to greed-based corporate "husbandry."

As the eminent farmer-poet-activist Wendell Berry tells us, eating is a profound political act. It lets you and me vote for the Butterball industrial model or choose to go back to the future of agri culture, which is the art and science of cooperating with nature, rather than overwhelming it. That cooperative ethic is the choice of the remarkable good-food uprising that has spread across the country in the past 30 years. Now the fastest-growing segment of the food economy, it is creating the alternative model of a local, sustainable, small-scale, community-based, organic, humane, healthy, democratic and tasty food system for all.

Agri-industry doesn't care whether it makes food or widgets, for it's run by people who are dedicated solely to making money. In contrast, those involved in agri culture love what they do and care deeply about making the very best food they can. Their attitude is summed up by Lee Jones, a sustainable farmer in Ohio. Asked what he'd be if he weren't a farmer, Lee replied: "Disappointed."

This Thanksgiving, let's support, celebrate and share the amazing bounty that dedicated farmers like Lee Jones produce -- for us, for the land and for the future.

Related Topic(s): American History; Food; Food Industry- Industrial; Pilgrims; Thanksgiving; Turkeys, Add Tags
Add to My Group(s)
Go To Commenting
The views expressed herein are the sole responsibility of the author and do not necessarily reflect those of this website or its editors.