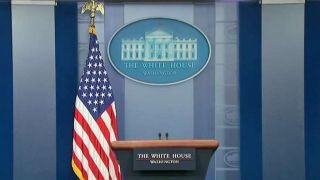 It's been nearly 100 days since Donald Trump appointed Stephanie Grisham to be the new White House press secretary, and during that time she has refused to hold a single press briefing. Ripping up decades of protocol and giving up on even the appearance of caring about transparency, the White House now most often communicates with journalists by allowing them to shout half-heard questions at Trump as he makes his way to the Marine One helicopter.

Gutting the White House press briefings is all part of a larger, historic, and incremental effort by the Trump administration to lock out the press -- and, by extension, the public -- from the government's official duties and business. Now the implications are being felt as Trump is mired in an impeachment crisis. And for the White House, not hosting press briefings is a very good thing.

"Imagine if the WH had to answer questions at a briefing every day about Ukraine given how quickly new developments are happening," noted CNN political correspondent Abby Phillip. Imagine, indeed. In short, it would be a communications and messaging disaster for the White House. But for now, Trump's team gets to avoid that daily fiasco because the administration, in a stunning display of contempt for the free press and transparency, pulled the plug on press briefings.

If the Trump White House were waging a fact-based impeachment defense the way Bill Clinton's White House did in the late 1990s, then not having press briefings would be bad, because that would rob Team Trump of a daily chance to set the impeachment narrative and pound on key facts. But of course, that's not happening. Instead, the Trump defense is built on lies, debunked conspiracies, and, perhaps most oddly, public admissions of guilt. In this scenario, the last thing the White House wants is to face a series of detailed questions from seasoned (and skeptical) reporters.

Let's face it: The television clips from the daily press briefings these days would be brutal, as Trump's press secretary would be incapable of honestly addressing a mountain of questions about the quid pro quo the president tried to pull off in Ukraine to get a foreign power to interfere on his behalf in a U.S. election. Those stuttering responses, visuals of reporters catching the White House in lies, and lots of likely contentious back-and-forth with journalists would run on a cable news loop and reinforce the narrative that the White House is careening out of control. But with no press briefings, the White House gets to sidestep that debacle.

Related Topic(s): Press Secretary; Questions; Reporters; White House Correspondents Association; White House Press, Add Tags
Add to My Group(s)
Go To Commenting
The views expressed herein are the sole responsibility of the author and do not necessarily reflect those of this website or its editors.