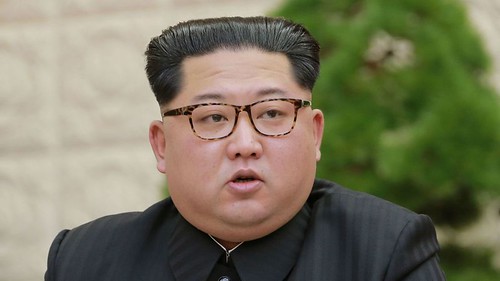 History will be made Tuesday when President Donald Trump and North Korean Premier Kim Jong Un meet in Singapore for an unprecedented summit -- no meeting between the leaders of these two countries has ever taken place. The transition from the threats of war and insult-hurling that defined what constituted "relations" to the current atmosphere of mutual respect -- even admiration -- has been as dramatic as it has been head-spinning.

It was barely two weeks ago that the summit was cancelled due to an impolitic exchange initiated by national security adviser John Bolton and Vice President Mike Pence, who stated that the model America was drawing upon as a template for North Korea to follow was that of Libya, which gave up its weapons of mass destruction in 2002-2003, only to have its government overthrown as part of a U.S.-led intervention in 2011, resulting in the particularly brutal murder of the ousted dictator, Moammar Gaddafi.

North Korea vociferously objected to this characterization of its disarmament, reminding the United States that it possesses a viable nuclear arsenal that it is not afraid to use to protect itself. Trump, taking umbrage, announced that he would not attend the Singapore summit. But his announcement, delivered in the form of a letter, was surprisingly diplomatic, leaving open the possibility of the summit being reconstituted. North Korea followed by sending its spymaster to the United States, where he hand-delivered a letter from Kim to Trump. After a photo op with handshakes and smiles on the White House lawn, the American president announced that the summit was back on -- such is American diplomacy in the age of Trump.

Trump has gone out of his way to keep expectations of what will be accomplished in Singapore low, especially when it comes to the issue of any disarmament agreement, indicating that while he will insist upon the complete denuclearization of North Korea (something Secretary of State Mike Pompeo has said North Korea both understands and supports), the process of negotiating a disarmament agreement will most probably take place in phases. There has been a surprising amount of secrecy surrounding the actual disarmament aspects of this summit, attributed both to the sensitivity of the subject and to the fact that the Trump administration has limited the number of people involved in the pre-negotiations, cutting off the traditional routes of leaking that exist when large bureaucracies are engaged.

Any discussion of a disarmament agreement involving the elimination of North Korea's nuclear weapons, as well as any other capabilities, such as uranium enrichment, plutonium production, and ballistic missiles and associated manufacturing infrastructure, would be purely speculative. However, Trump's precipitous decision to withdraw from the Iranian nuclear agreement provides an indirect indication that whatever form a prospective North Korean disarmament agreement takes, it will have to contain robust verification procedures that, given the level of intrusiveness Trump has demanded of an acceptable Iran nuclear agreement, may prove problematic.

In principal, arms control agreements and their associated verification mechanisms are reasonably straightforward. An objective is agreed upon, the various components for which elimination and/or monitoring comprise the objective are identified, the inspected party provides a declaration that lists in total the items, activities and locations of interest, and a mechanism of verifying the desired outcome (destruction, dismantling, demilitarization, monitoring) is defined, organized and implemented. In the case of North Korea, at least one objective already has been identified -- denuclearization. What is not known is what "denuclearization" constitutes. At its most basic, denuclearization would involve the dismantling of North Korea's actual nuclear weapons. North Korea is estimated to possess at least 60, and possibly many more. These weapons would have to be declared in their totality, locations identified, a mechanism of dismantling defined and a means of disposing of the weapons-grade nuclear material agreed to.

Nuclear weapons have been eliminated under prior disarmament agreements. The bilateral arms reduction agreements between the U.S. and Russia have allowed for nuclear material used in dismantled weapons to be stored in "reserve." This would not be an acceptable solution for North Korea -- both the U.S. and Russia were permitted, under the terms of their agreement, to retain a nuclear arsenal. North Korea will not be allowed to do so, so the nuclear material will need to be disposed of. There are precedents for this: The elimination of South Africa's nuclear weapons, and those of Ukraine, Belarus and Kazakhstan all involved the removal of all fissile material from the territory and control of the disarmed party.

The simple elimination of North Korea's declared nuclear arsenal would represent the most basic measure that could be taken to meet the definition of denuclearization. However, it is unlikely that the United States will agree to such a limited agreement. More realistically, it will require North Korea to give up both the nuclear weapons and their means of production, inclusive of any program dedicated to the manufacture of fissile material, specialized high explosives, weapons assembly and weapons testing (North Korea, in a show of good faith, claims to have destroyed its sole nuclear weapons test facility by blowing up tunnels used as part of the testing process. While this destruction was witnessed by international reporters, it has not been verified by any process agreed to in support of any potential denuclearization agreement).

The declarations involved in any such exercise would be extensive and extraordinarily complicated, comprising specific industrial facilities, specialized equipment unique to nuclear weapons manufacturing, dual-use equipment (that which can be used in support of a nuclear weapons program but also has legitimate non-nuclear use as well). North Korea could be expected to provide a breakdown of what materials and equipment used in its nuclear weapons program were produced indigenously, and what was procured from abroad. The latter has historically proven to be a sensitive issue, especially when the importation of sensitive materials fell afoul of international law or sanction (the case of Iraq and Iran both stand out in this regard).

The United States has linked the threat of North Korea's nuclear weapons to an intercontinental ballistic missile (ICBM) capable of delivering a nuclear warhead to American soil. As such, it is highly likely that the United States will insist on the inclusion of North Korea's ICBM capability in any denuclearization agreement. Both Japan and South Korea have indicated that they would like any such agreement to also involve North Korea's short- and intermediate-range missiles, which pose a threat to their respective homelands. As with nuclear weapons, any agreement involving ballistic missiles would require a declaration of the numbers of missiles and their locations. Likewise, the industrial facilities involved in the manufacture of North Korea's ballistic missile arsenal would have to be declared, along with all associated equipment (including a breakdown of what was produced indigenously, and what was procured abroad). The United States has a wealth of experience in framing agreements of this nature, both in terms of bilateral disarmament agreements with the Soviet Union/Russia and the elimination of the ballistic missile capability of Iraq (overseen by the United Nations) and Argentina (overseen by the Missile Technology Control Regime).

The elimination of the totality of North Korea's ballistic missile programs would provide the most convenient mechanism of disarmament, allowing for the destruction of all missiles, regardless of range, and the dismantling of all manufacturing plants associated with ballistic missile production. However, it is unlikely that North Korea will agree to give up this capability upfront. Rather, there would be a phased approach toward ballistic missile disarmament, beginning with ICBM capabilities and progressing to intermediate-range missiles before culminating in short-range missiles. The last two phases would more than likely be linked to confidence-building measures on the part of the U.S. and South Korea, including the reduction and eventual elimination of joint military exercises, the drawdown of U.S. combat power in South Korea, the signing of a peace treaty formally ending the state of war on the Korean Peninsula that has existed since 1950 (when the Korean War started), and the U.S. providing specific security assurances to the North Korean government.

In the case of such a phased approach, any agreement would have to differentiate between permitted and proscribed activity, similar to the approach taken by the U.S. and the Soviet Union/Russia in the Intermediate-Range Nuclear Forces (INF) Treaty, in which short- and intermediate-range missiles were eliminated while ICBMs were permitted, and Iraq after the Gulf War, in which missiles with a range greater than 500 kilometers (310 miles) were prohibited, but Iraq was permitted to produce missiles possessing a range of less than 500 kilometers.

As difficult as all of this sounds, the most challenging aspect of any disarmament agreement is verification. While historically, arms control agreements have been put in place using nonintrusive technical means to verify compliance (the Strategic Arms Limitation Talks, or SALT, between the U.S. and Soviet Union relied exclusively on each nation's so-called "national technical means," or spy satellites and other remote intelligence-collection capabilities for this purpose), since the ground-breaking INF Treaty in 1988, almost every arms control and disarmament agreement or treaty has included a form of on-site inspection involving teams of inspectors gaining direct access to the locations and materials of interest.

There are basically two schools of thought on the issue of on-site inspection. The first is a treaty-oriented approach that defines the mandate of the conduct of inspections, detailing everything from team size and composition, notifications of inspection activity, how a team travels to and from an inspected site, what equipment can or cannot be carried by the team, how inspection equipment is to be used during an inspection, what information is allowed to be collected during an inspection, how this information is recorded, and who has access to inspection-derived information. The INF Treaty serves as the ideal case study in this regard and has influenced every on-site inspection-based arms control/disarmament agreement that has transpired since.

Related Topic(s): Denuclearization; Disarmament; Iaea; North Korea; Treaty, Add Tags
Add to My Group(s)
Go To Commenting
The views expressed herein are the sole responsibility of the author and do not necessarily reflect those of this website or its editors.