While President Trump lashes out at rioting and looting in Portland and Kenosha, half way around the world, the USA and Turkey are plundering and looting Syria on a vastly greater scale with impunity and little publicity. 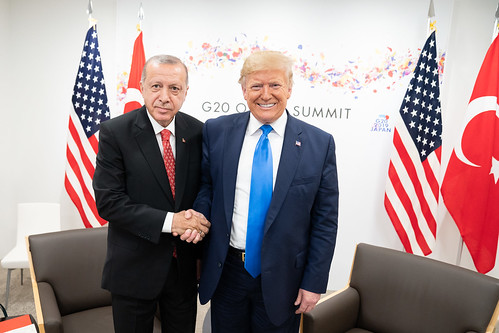 Turkey has been plundering the Syrian infrastructure for years. Beginning in late 2012 and continuing through 2013 some 300 industrial factories were dismantled and taken to Turkey from Aleppo, the industrial capital of Syria. "Machinery and goods were loaded on trucks and carried off to Turkey through the Cilvegozu and Ceylanpinar crossings. Unfortunately, 'plundering' and 'terror' have become permanent parts of the Syrian lexicon when explaining their saga."

In October 2019 Turkish forces invaded Syria and now occupy a strip of land in north east Syria. The area is controlled by the Turkish military and pro Turkish militia forces misnamed the "Syrian National Army". Turkish President Erdogan dubbed the invasion "Peace Spring" and said the goal was to create a "safe zone". Thereality was that 200 thousand Syrians fled the invasion and over 100 thousand have been permanently displaced from their homes, farms, workplaces and livelihoods.

Turkey now controls the border city of Ras al-Ain and the nearby Allouk water treatment and pumping station. This is the water station supplying safe water to the city Hasaka and entire region. The Turkish forces are using water as a weapon of war, shutting down the station to pressure the population to be compliant. For over two weeks in August, with daily temperatures of 100 F, there was no running water for nearly one million people.

With no tap water, civilians were forced to queue up for hours to receive small amounts from water trucks. Unable to buy the water, other civilians took their chances by drinking water from unsafe wells. According to Judy Jacoub, a Syrian journalist originally from Hasaka, "The residents of Hasaka and its countryside have been pushed to rely on unsafe water sources ....Many residents have been suffering from the spread of fungi, germs and dirt in their hair and bodies as a result of using well water that is not suitable for drinking and personal hygiene. The people of Hasaka remain vulnerable to diseases and epidemics because of the high temperatures and spread of infectious diseases. If the situation is not controlled as soon as possible, the spread of Corona virus will undoubtedly be devastating." A hospital medical director says many people are getting sick from the contaminated water.

Judy Jacoub explains what has happened most recently: "After Syrian and international efforts exerted pressure on the Turkish regime, 17 wells and three pumps were started . The main reservoirs were filled and pumping was started toward the city neighborhoods. However, despite the Turkish militia's resumption of pumping water again, there is great fear among the citizens."

The USA also has occupying troops and proxy / puppet military force in north east Syria. The proxy army is misnamed the "Syrian Democratic Forces" (SDF). How they got that name is revealing. They took on this name as they came under the funding and control of the US military. As documented here, US Army General Ray Thomas told their leadership, "You have got to change your brand. What do you want to call yourselves besides the YPG?' Then, he explained what happened: "With about a day's notice they declared that they are the Syrian Democratic Forces. I thought it was a stroke of brilliance to put democracy in there somewhere."

There are numerous parties and trends within the Syrian Kurdish community. The US has been funding and promoting the secessionist element, pushing them to ally with Turkish backed jihadists against the Damascus government. The violation of Syrian sovereignty is extreme and grotesque.

Prior to the war, Syria was self-sufficient in oil and had enough to export and earn some foreign revenues. The primary oil sources are in eastern Syria, where the US troops and proxy forces have established bases. It is desert terrain with little population.

To finance their proxy army, the US has seized control of the major Syrian oil pumping wells. It is likely that President Trump thinks this is brilliant bold move - financing the invasion of Syria with Syrian oil.

In November 2019 President Trump said, "We're keeping the oil... The oil is secure. We left troops behind only for the oil." Recently, it was revealed that a "Little known US firm secures deal for Syrian oil". Delta Crescent Energy will manage and escalate the theft of Syrian oil.

What would Americans think if another country invaded the US via Mexico, set up bases in Texas, sponsored a secessionist militia, then seized Texas oil wells to finance it? That is comparable to what the US is doing in Syria.

Related Topic(s): Syria Massacre; Syria Rebels; Syria Revolution; Syrian Arab Army; Syrian Kurds; Syrian Refugees; Turkey Attacks Syria, Add Tags
Add to My Group(s)
Go To Commenting
The views expressed herein are the sole responsibility of the author and do not necessarily reflect those of this website or its editors.