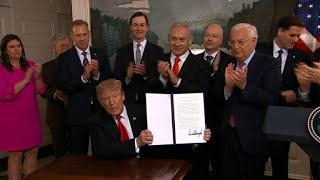 The Trump administration's illegal and unilateral recognition of Israeli annexation of the Syrian is an unfortunate return to the international jungle of the 1930s and 1940s, when Hitler annexed the Sudetenland and Mussolini annexed Nice from France.

Trump's policy is Nazi law, as so many of his policies are. His first wife Ivana maintained that Trump kept a copy of Hitler's speeches on his bed stand. It was said as part of a nasty divorce. But it is, sadly, nevertheless plausible.

The United Nations charter was crafted after World War II in an attempt to create a more just world order. One of the things the UN sought to do was to make aggressive warfare illegal, and to make annexation of other countries' territory equally illegal.

"All Members shall refrain in their international relations from the threat or use of force against the territorial integrity or political independence of any state, or in any other manner inconsistent with the Purposes of the United Nations."

Note that although the article does forbid aggressive warfare, it also is concerned to maintain the territorial integrity of existing states. Indeed, the maintenance of that integrity and sovereignty is considered key to the UN goal of preventing further world wars. Trump and Netanyahu have violated that principle of maintaining the territorial integrity of nation states, and it will certainly lead if not to war (Syria is weak) then to violence of some sort eventually.

Israel and the United States are both signatories of the UN Charter. Their problem is that the US wants Israel to be able to act with impunity in the Middle East, since it is a sort of aircraft carrier for US hegemony in the oil-rich region. The US might -- tsk tsk -- when Israel occupies 10% of Lebanon, as it did in 1982-2000, but Washington never does anything practical to rein in Israeli expansionism. Only when the other side has a powerful military (Egypt) or an effective guerrilla resistance (Hizbullah in Lebanon) do the Israelis relinquish any territory they have gobbled up.

So the Israelis keep making up exceptions to international law in an attempt to retain the ability to act like the aggressor states in WW II.

The argument being trotted out with regard to the Golan is that Israel conquered it as part of a defensive war, and annexing neighbors' territory is all right if it is done after an aggressive war. They point to adjustments against Germany after World War II. This is a bad faith argument, since the UN Charter was thereafter established to handle these issues and it invests the UN Security Council with the authority to make these decisions, not individual member states.

We know what the UN Security Council, including the US Government, thinks of the Israeli annexation of Gaza:

Having considered the letter of 14 December 1981 from the Permanent Representative of the Syrian Arab Republic contained in document S/14791,

Reaffirming that the acquisition of territory by force is inadmissible, in accordance with the Charter of the

1. Decides that the Israeli decision to impose its laws, jurisdiction and administration in the occupied Syrian
Golan Heights is null and void and without international legal effect;

2. Demands that Israel, the occupying Power, should rescind forthwith its decision;

Related Topic(s): Golan Heights; Iraq; Syrian Situation; Trump Crime; Trump Israel, Add Tags
Add to My Group(s)
Go To Commenting
The views expressed herein are the sole responsibility of the author and do not necessarily reflect those of this website or its editors.