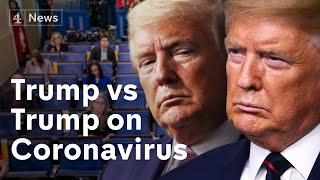 Trump vs Trump on Coronavirus. He said,.It will go away. Stay calm..
(Image by YouTube, Channel: Channel 4 News)   Details   DMCA

Bob Woodward interviewed Donald Trump back in January and February and now tells us that, way back then, Trump realized that the coronavirus was not only quite deadly and would infect even children, but also was airborne and highly contagious.

Right now it's fashionable to attack Bob Woodward for having sat on all that information, and debate whether he had a "duty to warn."

It's a reasonable discussion, but it misses the larger picture.

If Donald Trump knew how deadly COVID was, Bob Woodward could not have been the only person he told. Everybody in the Cabinet, the Vice President, the Health and Human Services Secretary, and pretty much everybody working around him in the White House had to have known.

He even put Mike Pence in charge of the coronavirus task force back then. They all knew.

We talk a lot about the "Trump Crime Family" but his entire Cabinet knew how bad this was last winter, too. Not only are Trump and his kids grifters and liars, but he put together an entire cabinet of grifters and liars.

In fact, it went beyond that. Senators Kelly Loeffler and Richard Burr, both Republicans, dumped stock after getting briefed about this knowledge.

A physician and professor at George Washington University has suggested that Donald Trump is guilty, at the least, of "negligent homicide." And certainly this is criminal political behavior.

Trump didn't just ignore what he knew about this virus, he actively lied about it to the American people. And he continues to lie about it to this day.

Holding giant rallies, as he did over the weekend, will lead to increased infection spreads and more deaths. There will be other Herman Cain's who will die in a few months because of what Trump is doing right now.

Related Topic(s): American Imperialism; Coronavirus; President Trump, Add Tags
Add to My Group(s)
Go To Commenting
The views expressed herein are the sole responsibility of the author and do not necessarily reflect those of this website or its editors.