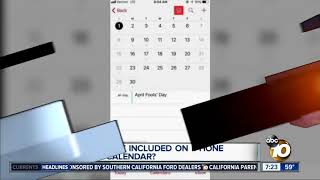 Today is Easter, an important Christian holiday. But it is not marked on the calendar that is part of the Apple software that came with my Apple computer laptop. Today is also April Fools day, and that is marked on the Apple-supplied calendar. For Apple's programmers, April Fools Day trumps Easter.

How can it be that an American company, Apple, can remember to mark on the calendar Cinco de Mayo (May 5), Mexico's commemoration of a Mexican army victory of the French in the Battle of Puebla in 1862, but not Easter?

Hanukkah on December 13, but not Easter?

Kwanzaa on December 26, but not Easter?

Groundhog Day on February 2, but not Easter?

Earth Day on April 22, but not Easter?

First Day of Ramadan Muslim holiday on May 15, but not Easter?

Eid al-Fitr marking the end of Ramadan on June 15-17, but not Easter?

Eid al-Adha, the Muslim Sacrifice Feast, on August 20, but not Easter?

Rosh Hashanah, the Jewish New Year, on September 10, but not Easter?

Yom Kippur, Jewish holiday on September 19, but not Easter?

Ashura, Muslim holiday, on September 20, but not Easter?

Diwali, the Hindu Festival of Lights, on November 7, but not Easter?

Related Topic(s): Celebration; Culture; Easter; Government; Spring; War, Add Tags
Add to My Group(s)
Go To Commenting
The views expressed herein are the sole responsibility of the author and do not necessarily reflect those of this website or its editors.