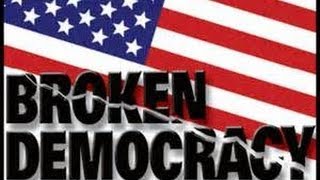 In just five short months, voters across the country will head to their local polling place to vote for local, state and federal offices to pretend we have a functioning democracy. But the truth is, our democracy is broken.

We make it difficult for whole groups of people to participate, like people of color, seniors, college students and low-income Americans. We cast our ballots on privately owned machines, but we have no way of telling whether they're counted correctly.

Our elections are primarily funded by corporate elite and billionaires who funnel their donations through dark money organizations. As former President Jimmy Carter pointed out on my radio program last year, the flood of money into our politics has effectively undermined US democracy and left us with American oligarchy. But the corrupting influence of money in politics hasn't just compromised our democracy; it's costing American lives.

Just one week after one of the deadliest mass shootings in US history, four gun control bills were brought forward in the Senate. The substance of the gun control bills had a tremendous amount of popular support: 92 percent of Americans polled support a universal background check to prevent people with felonies from buying guns and 85 percent support a "no-fly, no-buy" bill. That's people of both parties!

So, how many of those laws that pretty much all of us wanted actually passed the Republican-controlled Senate?

Even though two of the bills had a simple majority of support -- also known as a "constitutional vote" -- those two bills still failed because the Republicans filibustered them and required that each bill needed at least 60 votes to pass.

According to Vox, 56 senators have received at least an A-minus grade from the gun lobby, meaning that the National Rifle Association (NRA) considers those 49 Republicans and seven Democrats as "gun-industry-profits-friendly" as they come. And unsurprisingly, 56 Senators voted against the bill introduced by Chris Murphy that would require universal background checks -- the bill that 92 percent of Americans support.

It shouldn't come as a surprise that the NRA contributed a total of more than $36 million to 50 Republican senators over the course of their careers, according to the Center for American Progress Action Fund. And there are 10 Republican senators, representing 10 percent of the votes in the Senate, who have gotten an average of $3 million apiece over the course of their careers, just to say, "How high?" when the NRA yells, "Jump!"

These include veteran lawmakers like Senate Majority Leader Mitch McConnell, who has brought in at least $1.3 million over his 30-year career; Missouri Sen. Roy Blunt and Ohio Sen. Rob Portman, who have each received $1.4 million over their careers; and Pat Roberts from Kansas who has gotten nearly $1.6 million over the last 20 years. Sen. John McCain tops the list, though, by raking in nearly $8 million from the NRA over his 30-year career in the Senate.

Then there are the junior lawmakers, like Tom Cotton from Arkansas, who has only been serving in the Senate since last year and has already received $1.9 million in money from the NRA and its buddies. And in just the first two years of serving in office, Louisiana Sen. Bill Cassidy has brought in $2.9 million for his votes against gun regulation, while Iowa's Joni Ernst brought in $3.1 million, Cory Gardner from Colorado has brought in $3.9 million and Thom Tillis has gotten $4.4 million.

If we ever do want to see common-sense gun control legislation passed, we need to get money out of politics, we need to overturn Citizens United and we need to get the corrupting influence of corporate lobbyists out of our political system. Because as former President Jimmy Carter has pointed out, we're no longer living in a democracy where US politicians listen to the will of the American people.

We see the oligarchy in action when Wall Street interests try to use their purse strings to threaten Hillary Clinton about who she should choose for vice president, and we see it when a Senate chamber filled with gun lobby shills votes to keep the NRA happy and gun manufacturers profitable, against the will of more than 90 percent of Americans.

If we want to fix American democracy, if we want to take back political power from the oligarchs and corporate elite, we need to get money out of politics, and we need to make it clear that corporations aren't people. Otherwise, gun manufacturers and other special interests will continue to flood our political system with millions of dollars in donations just to help get their shills elected to vote against sensible gun control legislation and other regulations, most all at the expense of public health and safety.

Related Topic(s): Money Buys Power; NRA, Add Tags
Add to My Group(s)
Go To Commenting
The views expressed herein are the sole responsibility of the author and do not necessarily reflect those of this website or its editors.