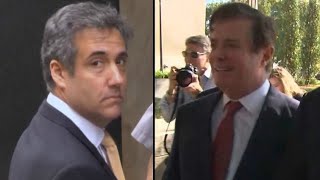 Like Nixon in the last days of Watergate, Trumputin has begun to twist in the wind.

* The mighty GOP stone wall is starting to crack.

* As Trumputin and the Saudis feast on Jamal Khashoggi, even some Republicans have been sickened by this brazen mafia hit on an established American journalist.

* Enough GOP senators voted to derail funding for the Trumputin/Saudi holocaust in Yemen ...a vote that may mark a major turn against the global empire (with special thanks to CodePink!).

* That vote shades the assumption that not enough Republican senators could ever vote to convict in an impeachment trial.

* They all face a tsunami of felony indictments spewing from upcoming House hearings, a Hallelujah chorus of fleeing Trumputin associates, endless self-incriminating tweets, a mentally deranged who-knows-what-he'll-say-next "Individual 1," and so much more.

* The "cancer on the presidency" has spread, with major investigations into every cavity of the Trumputin corpus, from Cohen to Flynn to Maria Butina to Roger Stone to Paul Manafort to the Party machine to the NRA to the Inauguration, the transition team, the administration itself, Mar-a-Lago, 666 Fifth Avenue, Trump Tower, and so much more.

* The likelihood of "espionage" as outlined by RSN founder Marc Ash will likely escalate to treason as the alleged president of the United States continually puts his own interests and those of his mob boss ahead of those of the country he was hired (though not really elected) to serve.

* Starting to rumble is the sleeping volcano of Trumputin's 1300 shady real estate transactions with Russian oligarchs since the 1980s, through which Donald illegally laundered the billions he needed to escape gargantuan debt and numerous bankruptcies. (Hear author Craig Unger and attorney Ted Vaill discuss this on my Green Power & Wellness Show at prn.fm).

* Reader Supported News has published a San Francisco Chronicle op-ed from Representative Jackie Speier (D-SF) at last detailing some of the underworld dealings that have left Trump in Putin's debt and offering hope for a deep Congressional dive into Putin's death grip on Trump's personal finances.

* Outright fascist attacks by lame duck legislatures in Wisconsin, Michigan, North Carolina, Ohio, and elsewhere have branded the GOP as a hate-democracy junta with zero concern for Constitutional guarantees or the electorate that did not vote for them.

Related Topic(s): Impeachment; Republican; Trump And Putin; Trump Apologists; Trump Con; Trump Cruelty, Add Tags
Add to My Group(s)
Go To Commenting
The views expressed herein are the sole responsibility of the author and do not necessarily reflect those of this website or its editors.