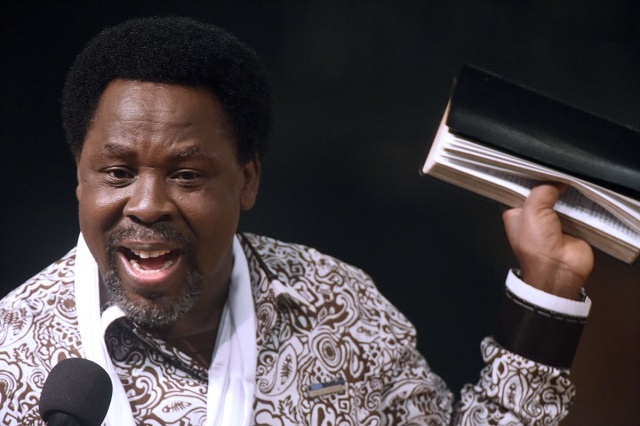 The recent arrival of Africa's most popular televangelist preacher, TB Joshua, to address thousands of foreign pilgrims in Nazareth produced a mix of consternation and anger in the city of Jesus's childhood.

There was widespread opposition from Nazareth's political movements, as well as from community groups and church leaders, who called for a boycott of his two rallies. They were joined by the council of muftis, which described the events as "a red line for faith in religious values".

Joshua's gatherings, which included public exorcisms, took place in an open-air amphitheatre on a hill above Nazareth that was originally built for papal masses. The site was used by Pope Benedict in 2009.

The Nigerian pastor, who has millions of followers worldwide and calls himself a prophet, aroused local hostility not only because his brand of Christianity strays far from the more traditional doctrines of Middle Eastern churches. He also represents a trend of foreign Christians, driven by apocalyptic readings of the Bible, interfering ever more explicitly in Israel and the occupied Palestinian territories and in ways that directly aid the policies of Israel's far-right government.

Nazareth is the largest of the Palestinian communities in Israel that survived the Nakba, or catastrophe, of 1948, which forced most of the native population out of the bulk of their homeland and replaced it with a Jewish state. Today, one in five Israeli citizens are Palestinian.

The city and its immediate environs include the highest concentration of Palestinian Christians in the region. But it has long suffered from the hostility of Israeli officials, who have starved Nazareth of resources to prevent it from becoming a political, economic or cultural capital for the Palestinian minority.

The city has almost no land for growth or industrial areas to expand its income base, and Israel has tightly constrained its ability to develop a proper tourism industry. Most pilgrims pass through briefly to visit its Basilica of the Annunciation, the site where the angel Gabriel reputedly told Mary she was carrying Jesus.

Nazareth's municipal officials leapt at the chance to exploit the publicity, and income, provided by Joshua's visit. The municipality's longer-term hope is that, if the city can attract even a small proportion of the more than 60 million Christian evangelicals in the US and millions more in Africa and Europe, it will provide an enormous boost to the city's economy.

Recent figures show evangelical tourism to Israel has been steadily rising, now accounting for about one in seven of all overseas visitors.

But as the fallout over Joshua's visit indicates, Nazareth may be playing with fire by encouraging these types of pilgrims to take a greater interest in the region. Most local Christians understand that Joshua's teachings are not directed at them and, in fact, are likely to harm them.

The Nigerian pastor chose Nazareth to spread his gospel, but faced vocal opposition from those who believe he is using the city simply as the backdrop to his bigger mission one that appears entirely indifferent to the plight of Palestinians, whether those living inside Israel in places such as Nazareth, or those under occupation.

Political factions in Nazareth noted Joshua's "ties to far-right and settlers circles in Israel". He is reported to have had meetings about opening operations in the Jordan Valley, the reputed site of Jesus' baptism but also the agricultural backbone of the West Bank. The area is being targeted by the far-right government of Benjamin Netanyahu for settlement expansion and possible annexation, thereby dooming efforts to create a Palestinian state.

A view of Armageddon

During his visits to Israel, Joshua has also enjoyed access to key government figures such as Yariv Levin, a close ally of Netanyahu's, who has been in charge of two portfolios viewed as critical by the evangelical community: tourism, and the absorption into Israel of new Jewish immigrants from the US and Europe.

Many in the evangelical community, including Joshua, believe it is their duty to encourage Jews to move from their home countries to the Promised Land to bring forward an end-times supposedly prophesied in the Bible.

This is the Rapture, when Jesus returns to build his kingdom on earth and righteous Christians take their place alongside him. Everyone else, including unrepentant Jews, it is implied, will burn in Hell's eternal fires.

Related Topic(s): Bible; Christian Minorities; Christian Religion; Christianity; Fire And Brimstone; Islam; Israel; Jerusalem; Jesus; Middle-east; (more...) Middle_East_Conflict; People; Prophet; Tourism, Add Tags  (less...)
Add to My Group(s)
Go To Commenting
The views expressed herein are the sole responsibility of the author and do not necessarily reflect those of this website or its editors.