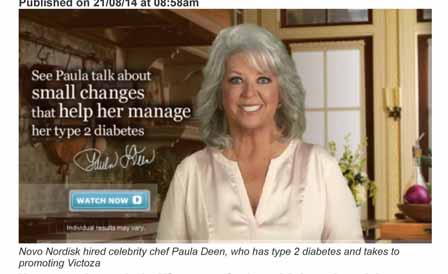 Body Heat star actress Kathleen Turner shared her battle with rheumatoid arthritis on CNN, not mentioning that a drug company who made arthritis drugs was funding her. Nor did TV talk show host Meredith Vieira mention any Merck subsidies when she hawked bone drugs for osteoporosis.

Sally Field, known as the family matriarch in the TV drama Brothers and Sisters, was the face of the bone disease awareness risks for women for several years, not afraid to name the drug Boniva. (Since Vieira and Field raised awareness about bone thinning, the class of drugs they promoted, bisphosphonates, has been linked to cancer, relentless pain, heart problems, jaw necrosis and the very fractures they were supposed to prevent. Thanks, Ladies.)

Pharma may love the buzz it can get from using celebrities but it hates grassroots social media because it can't control it like it does with its frequent TV ads. (The lucrative ads explain why mainstream media seldom exposes Pharma's dangerous prescription drugs and sleazy marketing. They're bought.)

"Adverse event reporting has been a concern for pharma since the advent of social media," admits an article on Medical Marketing and Media addressing how Pharma faces serious "public distrust" on social media.

Another Pharma marketer agrees, cautioning drug marketers not to let patient criticism overshadow "the work you've done online....The vocal minority now becomes the published majority, and that becomes the experience that everyone attaches themselves to....Putting your head in the sand and ignoring these people is the wrong way to think about how people are experiencing your brand or your content."

To counter grassroots testimonials about drugs, Pharma hires "patients," as it does celebrities, who will serve as Pharma shills, rhapsodizing about the drug's benefits for money. I have met such patients at FDA hearings who readily admit Pharma paid their expenses so they would praise the drug in approval or expanded indication (use) hearings.

One of the best sites to get non "pharma-washed" information about a drug is akapatient.com, a Webby award-winning patient driven site that lets you read thousands of entries about an individual drug from actual users. The number of side effects agreed upon by scores of users but found nowhere on the prescribing information is amazing. One drug, for example, was reported by scores of posters as causing hair loss yet the patient information made no mention of this serious side effect. No wonder patients can ending up knowing more about a drug than prescribers.

Pharma defenders like to dismiss such comments are "anecdotal" and such sites as an opportunity for drug bashing, yet patients also praise drugs on askapatient.

One of the most trusted sources for unbiased drug information is the People's Pharmacy, run for decades by Joe and Terry Graedon. Often you willl learn about inexpensive, even household treatments for health conditions that Pharma isn't eager for you to know.

Related Topic(s): Drug Companies- Marketing; Drugs; Drugs Prescription; Media Distractions Celebrities, Add Tags
Add to My Group(s)
Go To Commenting
The views expressed herein are the sole responsibility of the author and do not necessarily reflect those of this website or its editors.