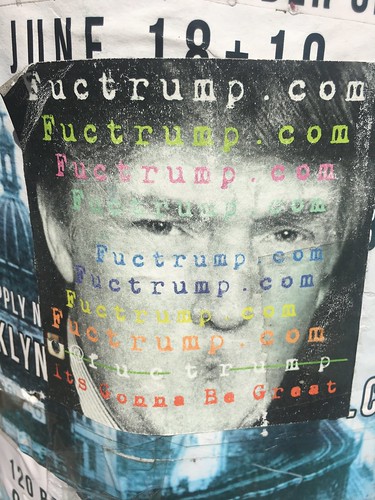 The debate goes on. How did a person like Donald Trump come to be the Republican candidate for the presidency of the United States? Years of Republican obstruction? The creation of fear based reality by the right wing of the corporate media? Politicians failure to represent their constituencies? Culture wars? Economic uncertainty? The destruction of the American dream?

So who or what is to blame? For the answer I look to a great philosopher, Pogo again, who I paraphrase here, "We have met the enemies... and they are us." We human beings are creating this situation by uttering untold millions of statements with or without evidence, producing consequences, which when combined are creating these circumstances. In this specific instance, creating the perceived need for a Trump in a portion of our citizenry.

I know. It feels so much better to blame someone else. To maintain our innocence in the midst of terrible events happening all around us. And yes, you and I are not responsible for anyone else's behavior. Certainly not for Trump you say. But as humans, we are all responsible for how we use the power of language and Trump is a stark reminder of that power.

Language is not only descriptive, but it's also powerfully generative, in that it can create and change realities within which people live their lives. When we speak, we are not only communicating an idea; we are also creating or contributing to a reality. We're making choices, taking actions, and preserving our security, all within a worldview that's created and sustained in language. As Heidegger wrote, "language is a house of being."

It's through the power of language that we create ourselves and our private and collective worlds by declaring what is and should be. There is no one else doing these things but us. So how can this world of human events, in which we are so embedded, be anyone else's creation?

Now you can skim along the surface of this essay and dismiss it because you didn't participate in Trump's creation. Or you can look a little deeper to the real issue here. It's the power of language to not only ongoingly create the world in which we live, but also to change it.

In short, we didn't create the raw materials, the people, places, and things, but we project our assessments onto them and think of our assessments as attributes of the objects of our observations. It's just that we forget our complicity and want to claim no power over the misery created as a by-product of our choices, all made in language. We are unimaginably powerful. All we need to do is recognize and use that power to change the world into a place that works, not just for the few, but for the many.

There is much work to be done and we need to be grateful for the emergence of this person called Donald Trump. He is a concrete manifestation of the power of language to create the circumstances that brought him into existence. Without him, we're left to imagine the effects of our conflicted mixture of national narratives. Now we see it in the flesh.

He has no credentials for the role for which he supposedly aspires. He is simply the product of a society that knows not its own power to create the illness he represents through the misuse of language. Not just the mainstream media who uses propaganda as a tool to enhance profits. Not just the politicians who lie as a way of life. Not just the political think tanks which create the deceptive narratives that obscure the facts. But all of us who talk without thinking about the consequences of our utterances on the lives of others.

Now is a confusing time in the U.S. so rejoice! Confusion is a very high state. It usually precedes new learning. Maybe the Trump experience is enough to push us through the pain of that new learning into a realization that he is our own creation. Or maybe nothing will come from this confusion but recriminations. Either way, we will make change or change will make us. I hope it's the prior.

Related Topic(s): Complicity; Corporate; Donald Trump Supporters; Economic; Media; Politicians; Presidency; Propaganda; Reality; Republican; (more...) Trump Campaign, Add Tags  (less...)
Add to My Group(s)
Go To Commenting
The views expressed herein are the sole responsibility of the author and do not necessarily reflect those of this website or its editors.