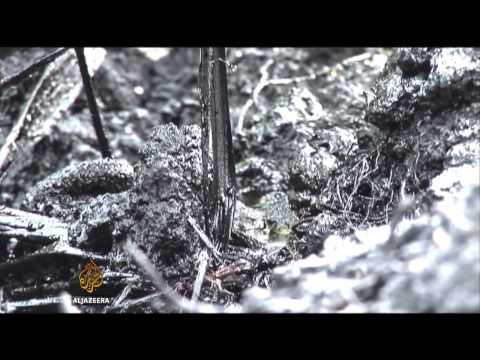 Those, like environmental lawyer Steven Donziger, who fight the corporate control of our society on behalf of the vulnerable, find the institutions of power unite to crucify them.

The persecution of the attorney Steven Donziger is a grim illustration of what happens when we confront the real centers of power, masked and unacknowledged by the divisive cant from the Trump White House or the sentimental drivel of the Democratic Party. Those, like Donziger, who name and fight the corporate control of our society on behalf of the vulnerable, see the judiciary, the press and the institutions of government unite to crucify them.

"It's been a long battle, 27 years," Donziger said when I reached him by phone in his apartment in Manhattan.

Donziger, who has been fighting polluting American oil companies for nearly three decades on behalf of indigenous communities and peasant farmers in Ecuador, has been under house arrest in Manhattan for a year. He will go to trial in federal court in New York on September 9 on contempt of court charges, which could see him jailed for six months. Ever since he won a multibillion-dollar judgment in 2011 against the oil giant Chevron, the multinational has come after him personally through litigation that threatens to destroy him economically, professionally and personally.

"Our L-T [long-term] strategy is to demonize Donziger," Chevron wrote in an internal memo in 2009, as reviewed by Courthouse News.

It started when Texaco went into Ecuador in the Amazon in the 1960s and cut a sweetheart deal with the military government then ruling Ecuador," Donziger told me. "Over the next 25 years, Texaco was the exclusive operator of a very large area of the Amazon that had several oil fields within this area, 1500 square miles. They drilled hundreds of wells. They created thousands of open-air, unlined toxic waste pits where they dumped the heavy metals and toxins that came up from the ground when they drilled. They ran pipes from the pits into rivers and streams that local people relied on for their drinking water, their fishing and their sustenance. They poisoned this pristine ecosystem, in which lived five indigenous peoples, as well as a lot of other non-indigenous rural communities. There was a mass industrial poisoning.

"By the time I went down there in the early 1990s, many people had died, cancer rates were skyrocketing according to several independent health evaluations, people were really hurting. There was zero regard for the lives of the local people by Texaco. I was a very young lawyer back in 1993 when I first went to Ecuador. It was like looking at an apocalyptic scene. There was oil on the roads. People were living in abject poverty. They had no shoes. They would get oil on their feet when they walked along the roads. The oil pollution had permeated every aspect of daily life. It was in the food supply. It was in the water supply. It was in the air. The average person there would get exposed multiple times a day to very harmful, cancer-causing toxins, with foreseeable results.

"I, with other lawyers, filed a lawsuit in New York against Texaco. The reason we filed in New York was because Texaco's headquarters were in New York in 1993. The decisions to pollute in Ecuador, to play God to the people of Ecuador, were made in New York. We sued in New York. Texaco tried to get the case back to Ecuador where they had never been held accountable, where they knew the indigenous peoples had no money or resources to find lawyers.

"They thought it would just go away," said Donziger. "Over a 10-year period, we battled to get a jury trial in the United States. Ultimately, they won that part of the battle. It went down to Ecuador.

"We started working with a team of Ecuadoran lawyers in the early 2000s. We went forward with the lawsuit. We produced voluminous scientific and testimonial evidence, showing that they caused probably the world's worst oil pollution. It was called the 'Amazon Chernobyl' by locals and experts. They dumped 16 billion gallons of toxic waste. They did it deliberately to save money. This was unlike the BP spill in the Gulf of Mexico, which was a terrible accident, even though it was a product of horrendous negligence by BP. This was done by design to pollute, knowing that people would die, and that indigenous groups would be decimated, and that this beautiful part of the Amazon would be destroyed."

The refusal to abide by even minimal environmental regulations saved Texaco an estimated $3 on every barrel of oil produced over 26 years (1964-1992), according to Amazon Watch, or an estimated extra $5 billion in revenue. The hundreds of waste pits the company eventually abandoned in Ecuador, on average, contain 200 times the contamination allowed by typical global standards.

"They tried to grind us down using classic corporate defense tactics," Donziger said of the legal war. "They filed thousands of motions. We stood strong. We had a great legal team of Ecuadorian lawyers."

In the end, they won a stunning victory, a rare moment of accountability for first-world conglomerates who rape the environment of developing nations by exploiting weak, corrupt governments.

Related Topic(s): Amazon; Chevron; Corporate Corruption Crime; Corporate Journalism; Corruption, Add Tags
Add to My Group(s)
Go To Commenting
The views expressed herein are the sole responsibility of the author and do not necessarily reflect those of this website or its editors.