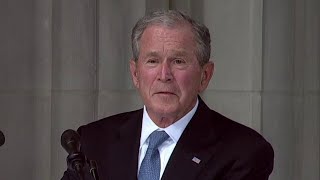 George W. Bush is being rehabilitated in the age of Trump, as the second worst president in American history is burnished by the absolute worst.

Much that is wrong with politics in the Trump era, however, was foreshadowed by Bush. It was Bush who practiced the Big Lie to take the country to war against Iraq. It was Bush who encouraged climate denialism and gutted health, financial and environmental regulation. His deregulated financial institutions plunged the country into the 2008 Depression and blighted the lives of millions of Americans who lost their homes.

Trump is, notoriously, a pathological liar who has told thousands of whoppers.

So far, at least, Bush's lies were more consequential. Trump lies about having been a good student or about being a billionaire.

Bush lied the country into a war for oil.

His chosen instrument was the allegation that Iraq had an active nuclear weapons program (the same lie that Pompeo and Bolton are peddling about Iran today).

He and his henchmen also constantly hinted around broadly that the secular Baathist regime, which refused to make Islam the religion of state, was actually in bed with the hyper-fundamentalist terrorist group, al-Qaeda. Another lie.

Bush's national security adviser, Condi Rice, batted away doubts about Iraqi nukes on the grounds that "we don't want the smoking gun to be a mushroom cloud."

Secretary of Defense Donald Rumsfeld, challenged as to where exactly these nuclear sites were, lied that we knew... "We know where they are. They're in the area around Tikrit and Baghdad and east, west, south, and north somewhat." Maybe underground on the way to China?

Secretary of Defense Colin Powell was sent to be a laughingstock at the United Nations with a power-point on how Iraq had mobile biological weapons labs on Winnebagos. Biological weapons labs need clean rooms to keep the microbes from escaping. Where, pray tell, would you put a clean room on a Winnebago? And would you really want to be sweating over a petrie dish on Iraq's pothole-filled roads?

I knew someone present in the room at the UN. They laughed Colin Powell out of it.

This sort of glib rhetoric was to cost the lives of nearly 5,000 American military personnel and the lives of several hundred thousand Iraqis, leaving hundreds of thousands of widows and millions of orphans in its wake. It would leave some two million Iraqis wounded. It would displace, i.e., make homeless and exile, 4 million Iraqis. It would destroy Iraqi industry and leave some parts of the country with a 70% unemployment rate.

What it would not do is discover any nuclear weapons facilities, or even so much as a blueprint for a weapon.

Bush's lie about nukes had a cover. His administration swept up chemical, biological and nuclear weapons under a single rubric, "weapons of mass destruction." The very phrase was a lie, an attempt at an alibi by a criminal administration.

Related Topic(s): Bush Admin; Bush Co-Conspirators; Bush Crimes; Bush War Strategery; Nukes, Add Tags
Add to My Group(s)
Go To Commenting
The views expressed herein are the sole responsibility of the author and do not necessarily reflect those of this website or its editors.