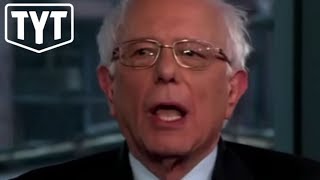 Bernie Sanders trounced Fox News on its own turf when he demonstrated that the town hall audience assembled for him by the pro-plutocrat White Nationalist channel was enthusiastic about medicare for all.

This outcome should not have surprised anyone, since running on affordable health care insurance proved gold for Democratic candidates for the House of Representatives last November.

Republicans were so spooked by this development that many of them simply lied in public about supporting Obamacare, when they had repeatedly voted to repeal it.

The public is clearly upset about the cost and uncertainty of health care insurance, and wants something done to fix the mess it has become.

Despite their big talk, Trump and the Republicans have not in fact put forward any plan at all, and since they work for the corporations and not the people, they don't really care if we go back to having 40 million people, including toddlers and families, without health care insurance.

That Trump speaks out of both sides of his mouth on the issue, promising better and more comprehensive coverage while he attempt to destroy the Affordable Care Act in the courts, is lost on no one.

Hence, 59% of the public say they do not trust Trump on health care. (41% are gullible fools).

Between 52% and 54% of respondents say that they favor a single-payer system like Medicare for all, the Politico/Morning Consult poll found.

It looks to me as though Trump is going to run, and try to get the Republicans in the Senate to run, on abolishing Obamacare without having anything ready to take its place except some Trumpian hot air, and the current evidence is that this strategy is a one-way ticket for politicians to the unemployment line.

Insurance company polls say they show that when it is explained to the public that medicare for all will raise their taxes, they back off their support for it.

This "explanation," however, is corporate propaganda. Medicare for all may raise somebody's taxes, but not those of the general public. Some 44% of the public does not even pay Federal income tax.

And even if you are in the top 10% and your taxes did go up, you wouldn't have to pay for private health insurance and for co-pays, and you'd have to see whether these savings offset the new taxes.

It is daft to look at this problem only through the lens of taxes, as though we aren't already paying a kind of tax because our health care system is so expensive compared to that of other industrialized democracies. We'd realize tremendous savings by having the clout to slow medical inflation.

Related Topic(s): Bernie Sanders; Carbon Tax; Corporations; Medicare For All; Obamacare; Polls, Add Tags
Add to My Group(s)
Go To Commenting
The views expressed herein are the sole responsibility of the author and do not necessarily reflect those of this website or its editors.