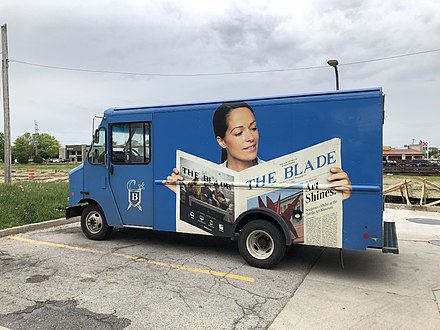 For me, having done all I could to advance Bernie Sanders' position over the past 4 years, this is the first Mainstream quasi-endorsement for Bernie that I have seen. It is not all-out positive, but for its city of origin (Toledo, Ohio), I believe it to be quite significant as a harbinger or bell weather indicator for what is to come on the editorial pages of the great state of Ohio, which is where 7 US Presidents were born, second only to Virginia, with 8 Presidents' birthplaces.

I want to present the entire statement, rather than just put it out as a Quick Link. If you want to help Bernie early on, especially in the 4 first primary states, please share this with the editorial page editor of two or three of the newspapers in your area. Thank you, and please do comment!)

by Keith C. Burris, Editor and Vice President of The Blade and editorial director of Block Newspapers

He has raised the most money of all the Democratic candidates, by far some $95 million in 2019 from 5 million donations though the average contribution to Bernie is $18. He raised $34.5 million in the last quarter alone. He got 40,000 new donors on the last day of the year.

When Mr. Sanders renounced bundlers and PACs it was said that he had unilaterally disarmed himself in the money race. Instead he is killing it.

Related Topic(s): Battle For The Editorial Pages Of America; Bernie Sanders 2020 Endorsements; Editorial Boards Of American Newspapers; Editorial Page Endorsements; Ohio In The 2020 Election, Add Tags
Add to My Group(s)
Go To Commenting
The views expressed herein are the sole responsibility of the author and do not necessarily reflect those of this website or its editors.