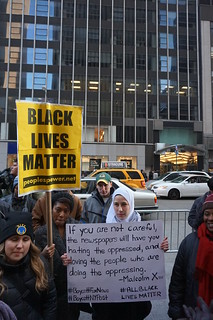 The last several months have seen a debate, at times heated, between the #BlackLivesMatter movement and those who respond with #AllLivesMatter.

I think a lot of people -- perhaps not all -- who are using both tags are missing a larger point and opening themselves up to ultimately devaluing a lot of lives.

People use #BlackLivesMatter to denote that given our criminal "justice" system, African Americans are frequently targeted, endangered and at times killed largely because they are black. And that's totally true and needed saying a long time ago.

People saying #AllLivesMatter presume to appeal to universal values, perhaps also noting that poor whites and others have particular vulnerabilities to police abuse as well. And the last part is certainly true. But it is odd to seem to appeal to universal values in a way that seems to seek in broaden the point to include a relatively privileged group.

They crit each other: "The Defacement of Sandra Bland Mural Proves #AllLivesMatter Is Destructive" ("#AllLivesMatter is a mantra of white supremacy that ignores history..." and "#BlackLivesMatter Should Move Towards #AllLivesMatter" ("Twice as many Whites are killed than Blacks by cops, which means they are killed at about a third of the rate as Blacks.")

But both sides limit who they mean by "lives." They effectively exclude the victims of the U.S.'s highest officials. When most people use #BlackLivesMatter, they seem to be saying that all black U.S. lives matter when taken unlawfully by the government. And when most people who use #AllLivesMatter use it, they seem to be saying all U.S. lives matter when taken at the hands of police authorities -- not just black U.S. lives. But the formulation effectively excludes the lives of millions of people who U.S. officials have deemed expendable for reasons of state.

Charles Blow of the New York Times for example at one level makes a legitimate point: "#AllLivesMatter may be your personal position, but until that is this COUNTRY'S position it is right to specify the lives it values less..." But aren't some of the lives that this country values less the lives our government and military has taken in Iraq and Afghanistan the last 15 years? Blow also tweeted: "I will not be an accessory to my own oppression. #BlackLivesMatter" But nor should one be an accessory to the oppression of others.

What should be a glaring blind spot has at time reached absurd proportions. Hillary Clinton saying "all lives matter" at a predominantly black church was deemed a "misstep" by NPR, but why not examine if it makes any sense coming from her? While Senator, Clinton voted for authorizing Bush to invade Iraq, resulting in hundreds of thousands killed and millions displaced. While Secretary of State, Clinton helped preside over the U.S. massive nuclear weapons arsenal, which threatens the entire planet, the drone assassination program which has killed thousands and the NATO bombing of Libya, boasting afterward of Muammar Gaddafi: "We came, we saw, he died." That doesn't exactly square with a position of "all lives matter."

As it is, #BlackLivesMatter fails to genuinely uplift the lives of the most discarded by remaining within a national confine. And #AllLivesMatter isn't being universal at all -- in its current form, it's being outright nationalistic and parochial.

Many now know the names of Sandra Bland and of Samuel DuBose and other African Americans whose lives were devalued by law enforcement officials, we know their names and we know some of their stories.

The U.S. government has been outright bombing and attacking several countries in the Mideast for years now. Iraq, Afghanistan, Syria, Somalia, Pakistan, Yemen. How many names do you know of the victims of U.S. foreign policy?

We know the names of the victims of the so-called Islamic State, people like Steven Sotloff. We know the names of victims of the Taliban, like Malala Yousafzai, who recovered from their attack on her. But the U.S. government has killed thousands of people in Iraq and Afghanistan, but we don't know the names, we don't listen to their stories. Virtually the only time we meaningfully perceive the violence of U.S. foreign policy -- in media or anywhere really -- is when U.S. soldiers are hurt or killed. Otherwise, the violence is normalized as in Deters's quote atop this article. It is decidedly off stage, a sideshow at best.

Have you thought of a civilian victim of U.S. policy who you could name? You probably came up with Anwar al-Awlaki. But the reason you know his name is he was a U.S. citizen, proving the point that often that is what bestows value upon a human life.

A study by Physicians for Social Responsibility earlier this year found: "The number of Iraqis killed during and since the 2003 U.S. invasion have been assessed at one million, which represents 5 percent of the total population of Iraq. This does not include deaths among the three million refugees subjected to privations."

But that's a non story. We've ended up in a sense embracing Stalin's aphorism: "The death of one man is a tragedy, the death of millions is a statistic."

A year ago, the U.S. government backed the latest of Israel's regular brutal bombing on Gaza, in which Israel killed over 1,000 Palestinians, hundreds of them children. For several months now, U.S. ally Saudi Arabia has been bombing Yemen to minimal attention and virtually no protest. President Obama just visited Ethiopia and Kenya -- with barely any criticism of how those nations have carved up Somalia, perpetuating killing there.

It may be possible to honor the noblest possible intent in #BlackLivesMatter: That we should rush to aid those lives that are disregarded by many. Likewise for #AllLivesMatter: We should be universal and apply the principle of veneration of the value of life truly to all.

Both impulses in their best form would argue to seriously scrutinize the U.S. government's role as global rogue cop -- a "cop" more dangerous than the most violent, racist police operating in the U.S. today.

Addendum: When I made an abbreviated version of this argument to my partner, Emily, and said: Both #BlackLivesMatter and #AllLivesMatter can in effect devalue non U.S. lives, she replied that it actually devalued all lives -- including U.S. lives. "How's that?" I asked. She said: "It helps continue the militarism and that will eventually take U.S. lives, so it devalues those lives as well." If it were not a pseudo military analogy, I'd say "touche."

Related Topic(s): Black Lives Matter, Add Tags
Add to My Group(s)
Go To Commenting
The views expressed herein are the sole responsibility of the author and do not necessarily reflect those of this website or its editors.