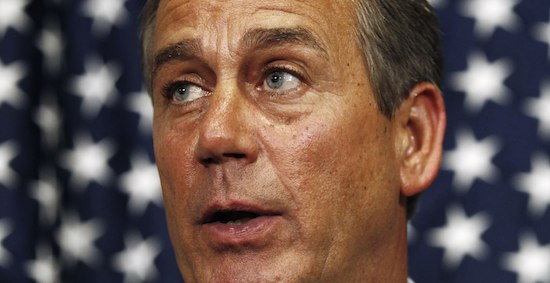 Enough Republicans, 48 of them (some tea party, some run-of-the mill GOP, as if there's a difference), revolted yesterday because they said the spending bill was too high. So Boehner needed some Democratic votes to make up the difference. He didn't get them. Democrats opposed the bill over the inclusion of a controversial FEMA funding measure that is both inadequate and requires an offset from a program that creates green manufacturing jobs.

So right now Boehner is scrambling to avoid a shutdown.

Senate Majority Leader Harry Reid (D-Nev.) said in floor comments that the Senate was waiting for House GOP leaders to decide their next move after the GOP's government-funding bill was defeated in a shocking Wednesday vote.

"We don't know what they are going to do over there today," Reid said from the Senate floor. "All kinds of rumors are floating around and I haven't spoken to the speaker or the majority leader over there on what they might do."[...]

GOP leaders must decide whether to give ground to Democrats or their conservative colleagues in order to move forward. Or they must convince their members to support their bill.

It's possible the House will try to pass another measure on Thursday. The House Rules Committee scheduled an "emergency" meeting on Wednesday night to approve a rule that would allow the House to consider a rule for legislation on the same day it is approved by the committee. Normally House rules don't allow such a maneuver.

House Majority Leader Eric Cantor (R-Va.) warned members of the House late Wednesday that weekend work may be needed to finish up a continuing spending resolution.

Boehner's options are limited: "to seek a new, less controversial offset, to scrap the idea of offsetting altogether, or to disentangle the disaster aid from the government funding bill altogether -- to essentially admit that yoking the two together in the first place was an error."

"The quickest and easiest way to solve this problem is for them to send us a CR without the disaster aid and for them to pass our FEMA bill," Sen. Chuck Schumer (D-NY) told reporters after the House vote failed. "There are other ways to do this. But again, our bottom line $1.04 trillion in the CR."

That would give Boehner the Democratic votes he needs to keep the government functioning, but would further anger the more extreme edge of his own caucus. It's becoming clearer by the day that he doesn't have control over his members, after his threats of taking away committee chairmanships over this vote was largely ignored.

Related Topic(s): Budget Cuts; Budget Extension; Government Shut-down; House Of Representatives; Republican; Republican Hypocrisy, Add Tags
Add to My Group(s)
Go To Commenting
The views expressed herein are the sole responsibility of the author and do not necessarily reflect those of this website or its editors.