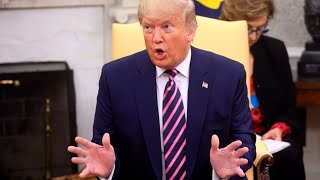 On Friday the 13th of December, the House Judiciary Committee approved two articles of impeachment against Donald Trump. After a 14-hour hearing, the committee voted 23-17, along party lines, to recommend to the House of Representatives that Trump be impeached for abuse of power and obstruction of Congress.

Article I: Abuse of Power

Article I charges: "Using the high powers of his office, President Trump solicited the interference of a foreign government" in the 2020 presidential election. Trump's "scheme or course of conduct" involved soliciting the Ukrainian government "to publicly announce investigations" into political opponent Joe Biden and "a discredited theory promoted by Russia that Ukraine rather than Russia interfered" in the 2016 presidential election.

Trump "conditioned two official acts on the public announcements that he had requested." They included (1) the release of $391 million of U.S. taxpayer money appropriated by Congress on a bipartisan basis for "vital military and security assistance to Ukraine to oppose Russian aggression," which he had suspended, and (2) a head of state meeting at the White House which the Ukrainian president had requested to "demonstrate continued United States support for the Government of Ukraine in the face of Russian aggression."

When his actions became public, Trump released the funds, "but has persisted in openly and corruptly urging and soliciting Ukraine to undertake investigations for his personal political benefit."

Trump's actions had the "corrupt purpose" to obtain a "personal political benefit" to "harm the election prospects of a political opponent." He has "compromised the national security" of the U.S. and "undermined the integrity of the United States democratic process."

Moreover, Trump's conduct was "consistent with" his "previous invitations of foreign interference in United States elections." This refers to Trump's public encouragement to Russia to meddle in the 2016 election, famously telling "Russia, if you're listening" to hack Hillary Clinton's emails. Although the Judiciary Committee decided not to include an article charging obstruction of justice as documented in the Mueller report, this reference provides corroboration of Trump's corrupt intent in his interactions with Ukraine.

The Constitution grants the House of Representatives the "sole Power of Impeachment." Article II states that Trump "directed the unprecedented, categorical, and indiscriminate defiance of subpoenas" issued by the House. As a result, "nine Administration officials defied subpoenas for testimony." Not one subpoenaed document was provided to the House committees conducting the impeachment inquiry.

Trump "sought to arrogate to himself the right to determine the propriety, scope, and nature of an impeachment inquiry into his own conduct." He thus "sought to obstruct and impede" the ability of the House "to investigate 'high Crimes and Misdemeanors'" which served "to cover up the President's own repeated misconduct."

Both articles charge that Trump has violated his constitutional oath to "defend the Constitution" and his "constitutional duty to take care that the laws be faithfully executed." Trump "will remain a threat to national security and the Constitution if allowed to remain in office" and his actions are "grossly incompatible with self-governance and the rule of law." Trump continues to urge Ukraine to interfere in the 2020 election. Thus, Trump "warrants impeachment and trial, removal from office, and disqualification to hold and enjoy any office of honor, trust, or profit under the United States."

Trump ordered all current and former senior advisers to defy congressional subpoenas, asserting that they would enjoy "absolute immunity" from criminal or civil liability. That theory was created by the Department of Justice's Office of Legal Counsel. It has never been recognized by any constitution, statute or court.

Nevertheless, 17 administration officials testified in the impeachment inquiry. The Intelligence Committee furnished the Judiciary Committee with a 300-page report detailing the overwhelming evidence of Trump's abuse of power. The most damning proof came directly from Trump's lips. In a July 25, 2019, phone call with Ukrainian PresidentVolodymyrZelensky, Trump replied to Zelensky's request to buy Javelin missiles by saying, " I would like you to do us a favor, though." Trump asked Zelensky to investigate Joe Biden and his son as well as the discredited theory of Ukraine meddling in the 2016 election.

In spite of those statements by Trump and corroboration by several non-partisan administration witnesses, the Republican members of the Judiciary Committee defiantly mounted a full-court press to discredit the case against Trump.

Those Republicans raised issues of process instead of the substance of the charges. They claimed that Trump was denied the right to present a defense when he had refused the committee's offer to participate in the hearings. They argued that impeachment requires the commission of a crime, which it does not. They distorted the facts. They falsely asserted that Ukraine didn't know Trump was withholding the military aid. They said that Ukraine got the aid and the head of state meeting without publicly announcing the launch of Trump's desired investigations. (In fact, Trump released the aid only after he got caught.) They declared that the courts should decide whether Trump can immunize subpoenaed witnesses, although that process could take a year or more.

The Republican committee members also maintained that abuse of power is not a high crime or misdemeanor. In its report to the Judiciary Committee, the Intelligence Committee interpreted "high crimes and misdemeanors" in light of the text and structure of the Constitution, records of the Constitutional Convention and state ratifying debates, and the history of the practice of impeachment. The Founders intended that impeachment be used principally for three types of presidential misconduct: (1) abuse of power, (2) betrayal of the nation through foreign entanglements, and (3) corruption of office and elections.

Related Topic(s): Democracy; Donald Trump Versus The Constitution; Election; House Judiciary Committee; House Of Represenatives; Trump Impeachment; Ukraine, Add Tags
Add to My Group(s)
Go To Commenting
The views expressed herein are the sole responsibility of the author and do not necessarily reflect those of this website or its editors.