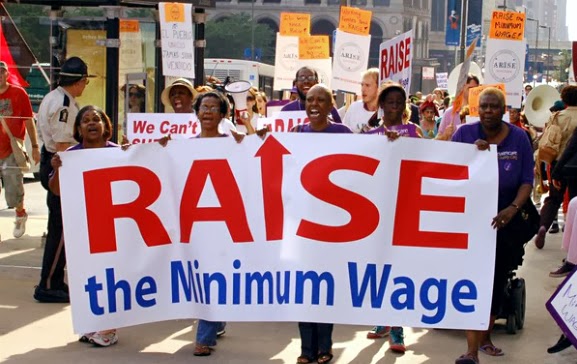 Donald Trump has claimed Democrats are "getting nothing done in Congress."

Something that frequently gets lost in the morass of mainstream talking points is that Democrats have passed 49 of 51 bills, resolutions, and suspensions since reclaiming the House of Representatives in January.

While it's true Republicans still maintain control of the Senate, under Majority Leader Mitch McConnell (R-KY), thereby stymieing chances of the House's legislation of ever reaching the President's desk, Democrats are laying down priorities they intend to sail through the Senate upon eventually regaining control.

Instead of thinking of their bills as exercises in futility, consider them bellwethers for where the Democratic party stands and intends to stand on issues in its future.

On Thursday, Democrats passed more historic legislation to raise the federal minimum wage to $15 from its current $7.25.

With 205 co-sponsors, the "Raise the Wage Act" seeks to gradually raise the minimum wage to $15 by 2024, giving a raise to roughly 40 million Americans.

Good news, but then, once again, there is Mitch McConnell, the self-described "Grim Reaper," who has vowed to kill bills he unilaterally deems "socialist legislation."

The day the bill passed the House, Senator and 2020 presidential candidate Bernie Sanders called on McConnell to allow the Senate to vote on its own companion bill.

"Four years ago, @KeithEllison and I rallied with low wage workers for an increase in the federal minimum wage of $15 an hour. We were laughed at. We were told it was unrealistic. We were told it wouldn't happen. Not anymore."

"Today I am proud to say that a $15 minimum wage has gone from laughable to inevitable."

He then challenged McConnell to "bring my $15 an hour legislation to the floor for a vote as soon as possible," explaining:

"If Senator McConnell wants to vote against that bill and explain to the people of Kentucky why he believes a $7.25 minimum wage is acceptable to him that is his prerogative. But he should not deny the rest of the Senate the opportunity to vote for this bill and increase wages for 40 million Americans. No one who has a job in America should be living in poverty. Let the Senate vote."

Related Topic(s): Jobs; Legislation; McConnell-Mitch; Minimum Wage; Minimum Wage Living Wage; Money; Money; Percentage; Poverty; Senate; (more...) Wages-Salaries, Add Tags  (less...)
Add to My Group(s)
Go To Commenting
The views expressed herein are the sole responsibility of the author and do not necessarily reflect those of this website or its editors.