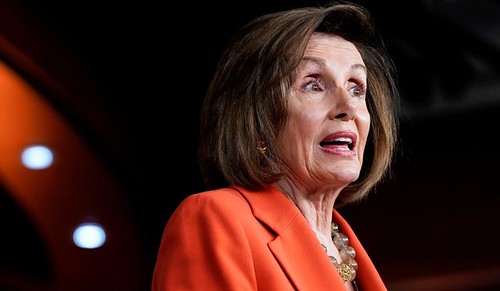 House Speaker Nancy Pelosi announced Friday that she would begin the process of transmitting articles of impeachment against President Trump to the Senate this week. She sent a "Dear Colleague" letter to every House Democrat saying the meeting of the House Democratic caucus set for Tuesday morning would take the final steps.

Pelosi initially indicated that the caucus meeting would discuss which House members would serve as impeachment managers and schedule the vote to select them -- the final action required before the beginning of a Senate trial of Trump -- leading to reports that the trial could begin as early as Thursday.

But on Sunday, in an interview on the ABC program "This Week," she seemed to hedge her bets, saying that at the caucus meeting, "we would vote to send them over, and we will determine in our meeting when we send them over." That could delay the opening of the Senate trial until later in the month.

Whatever the exact timing, Pelosi evidently failed to obtain any concessions from Senate Majority Leader Mitch McConnell on issuing new subpoenas for new witnesses and documents beyond those already used by the House Judiciary Committee in drafting the two articles of impeachment adopted by the House on December 18.

McConnell announced last week that he had 51 Republican votes in the Senate to begin the trial without new witnesses or documents, and to revisit the issue after House impeachment managers and attorneys for President Trump presented their cases. Given the 53-47 Republican majority, at least four Republican votes would be required to change the rules governing the trial.

The Democrats' list of witnesses underscores the right-wing character of the charges brought in the House impeachment inquiry. It confirms that the real driving force of impeachment is not the professed indignation of the Democrats over Trump's use of his presidential powers to gain an advantage over a political rival, but rather the concerns within the CIA, Pentagon and State Department over the disruption of a longstanding effort to use Ukraine as a base of military operations and provocations against Russia.

Pelosi reiterated these concerns in her interview on ABC with George Stephanopoulos. She seemed to concede in advance that Trump would not be removed from office by the Senate, but declared that "we have confidence in our case, that it's impeachable, and this president is impeached for life, regardless of any gamesmanship on the part of Mitch McConnell."

She continued, "Everything that he has done, whether it's in Syria vis-a-vis the Turks, whether it's been in Ukraine in terms of withholding assistance as they try to fight the Russians, his denial about their role in our election then and nowall roads lead to Putin. And sometimes I wonder about Mitch McConnell too, what's hewhy is he an accomplice to all of that."

While Trump declares that the congressional Democratic leadership could not be briefed in advance about the assassination of Iranian General Suleimani because they would have leaked it -- implying that they are traitors -- Pelosi suggests that not only Trump, but also Mitch McConnell are agents or "accomplices" of Russian President Vladimir Putin.

Once a Senate trial begins, the upper chamber will operate under unusual procedures, including sessions six days a week with all other business set aside until the trial's conclusion. Chief Justice John Roberts will preside and senators are barred from speaking or even asking questions. Instead, they must submit questions in writing to Roberts, who will read them out.

The five senators who are currently candidates for the Democratic presidential nomination, Michael Bennet, Cory Booker, Amy Klobuchar, Bernie Sanders and Elizabeth Warren, would essentially be taken off the campaign trail for the duration of the Senate trial. Four of the five, all but Bennet, are actively contesting the Iowa caucuses, where voting takes place on February 3.

McConnell has insisted on applying the same rules to the trial of President Trump in 2020 that were used in the 1999 Senate trial of President Bill Clinton, which gave 24 hours of trial time to the House impeachment managers and an equal amount of time for the president's defense, followed by 16 hours of questioning by senators, conducted through the chief justice.

In the Clinton trial, the Senate voted to subpoena three witnesses, who had already testified before the House. In the case of Trump, the Democrats are seeking the testimony of witnesses who refused to testify voluntarily before the House committees that conducted the impeachment inquiry.

Patrick Martin writes for the World Socialist Website (wsws.org), a forum for socialist ideas & analysis & published by the International Committee of the Fourth International (ICFI).
Related Topic(s): Democrats; House Of Represenatives; House Speaker Nancy Pelosi; Impeachment; Senate Impeachment; Trump And Bolton, Add Tags
Add to My Group(s)
Go To Commenting
The views expressed herein are the sole responsibility of the author and do not necessarily reflect those of this website or its editors.