Establishment Dems are urging a black pastor in Pennsylvania to get out of the race. 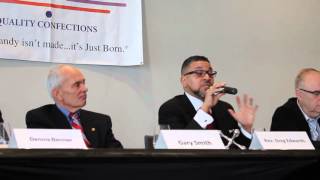 The Democratic Party's Washington-based insiders overseeing their 2018 efforts to win back a U.S. House majority are trying to undermine another progressive candidate -- this time it's Greg Edwards, an African-American pastor running in Pennsylvania's 7th district.

The Democratic Congressional Campaign Committee, or DCCC, is pressuring Edwards to get out of the race, according to reports by progressive groups working with Edwards and the Washington Post, which said DCCC officials were asking local Democrats if they thought Edwards could be persuaded to run for a state senate seat instead. Pennsylvania's congressional districts were just redrawn by the state Supreme Court after Republicans were found to have violated their state constitution, which apparently prompted the DCCC's intervention, according to the Post.

But the optics for the DCCC are terrible, and seem to confirm a deepening pattern. Only a week ago, the DCCC posted opposition research (usually used to attack opponents) about a Texas progressive congressional candidate, Laura Moser, on its website. That effort backfired, helping Moser to raise nearly $80,000 in days, and now she's coming in second in pre-election polls for Tuesday's primary, which would position her for a runoff election.

But the DCCC is its own sphere inside the larger party universe. It's a creature of House incumbents, and its biggest task is re-electing officeholders and trying to win 24 more seats needed for a majority. While that purview makes it inherently centrist, the DCCC apparently has little intention of heeding the chairman's message, even as Perez takes steps to break with the past and partner with grassroots organizations.

The effort to pressure Edwards to leave his congressional race is not the first instance of the DCCC turning its back on a progressive in Pennsylvania. In January, The Intercept detailed how the DCCC worked behind the scenes to undermine the candidacy of Jess King, a progressive who ran a successful nonprofit helping women in business, was successful raising funds, and also secured many local endorsements.

More recently after the mass shooting at a high school in Parkland, Florida, DCCC internal communique's initially advised its endorsed candidates not to overly "politicize" their response, underscoring to progressives how out of touch the DCCC is with the public. Other memos advised candidates to avoid endorsing Medicare for All health care reform.

But pushing a progressive black candidate like Greg Edwards to end his campaign hit a deep nerve.

"Greg Edwards is exactly the kind of progressive leader that the Democratic Party should be investing in," said Waleed Shahid, a spokesman for Justice Democrats, which has backed 52 progressives running for Congress and is helping his voter contact efforts. "It's a shame that the DCCC and the wealthy white donors and revolving door consultants that make up the Democratic Party establishment are actively trying to stop Greg. Their consultant-driven strategy seems to prefer milquetoast candidates who they believe can appeal to moderate Republicans over progressive candidates of color. This is what systemic racism looks like."

Shahid predicted the divide between the party's progressives and centrists will deepen.

"Now that progressives are threatening major upsets against their hand-picked candidates in upcoming primaries, the DCCC has begun an all-out war against progressives," he said. "It's candidates like Greg who will activate the base that will bring Democrats a majority in Congress: young people, people of color, women, and working people of all backgrounds. Greg's grassroots campaign is showing that when Democrats fight for progressive policies like Medicare for All, debt-free college and criminal justice reform, we can bring in the volunteer capacity and small-dollar donors we need to take back Congress."

Steven Rosenfeld  covers democracy issues for AlterNet. He is a longtime print and broadcast journalist and has reported for National Public Radio, Monitor Radio, Marketplace,  TomPaine.com  and many newspapers. (more...)
Related Topic(s): Campaign Ethics; DCCC; Elections; Progressives, Add Tags
Add to My Group(s)
Go To Commenting
The views expressed herein are the sole responsibility of the author and do not necessarily reflect those of this website or its editors.