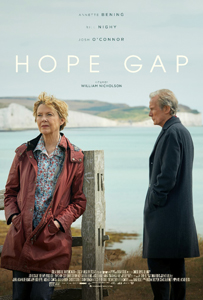 Hope Gap
(Image by Roadside Attractions)   Details   DMCA
When Annette Bening and Bill Nighy are featured in a film examining the dissolution of a marriage, expectations are high. In "Hope Gap," there are truths presented, questions to be parsed, and beautiful seascapes featuring white cliffs. Yet, something remains off.

The opening interior scenes feel like a filmed play. Conversation and actions have the quality of being typically British (Bening adopts an English accent), but before long, this viewer got the feeling that I'd been dropped into "Who's Afraid of Virginia Woolf?"

It's clear early on that the characters of Grace and Edward are operating on different wave lengths. Despite the outwardly comfortable scene of two adults at their respective computers, with one making tea for the other -- the dialogue reveals Grace's dissatisfaction and Edward's resignation to the ongoing routine. Grace works on her anthology of poems; Edward diligently edits and re-edits Wikipedia entries -- an activity that Grace casually dismisses.

Grace presents as acerbic, to the point of bullying her husband. Trying to elicit some form of enthusiasm from Edward about planning a dinner celebration for their impending twenty-ninth anniversary, the interaction quickly devolves from passive aggression to pure aggression on the part of Grace.

It is revealed that Grace has always been trying to get Edward to be more emotionally available. Resorting to outrageous and physical behavior in an attempt to extract some evidence of feeling from him ("I want a real reaction."), she is met with an infuriating low-key response from Edward. He states matter-of-factly, "You want something I haven't got."

The narrative is "inspired" by writer and director William Nicholson's experience with the end of his parents' marriage. (The script was adapted from Nicholson's play.) Their son, Jamie, (Josh O'Connor, who will be recognized by PBS fans) is a twenty-something who lives alone in London, with relationship issues of his own.

Jamie is used as a go-between by both Grace and Edward. The difference in their world views and attitudes is reflected in how they relate to their son. Grace longs for regular weekend visits; Edward is somewhat detached, stating flatly, "He has a life of his own."

Related Topic(s): Life Events; Marriage; Marriage; Marriage Infidelity Adultery; Movie_reviews; Movies; Movies-Film, Add Tags
Add to My Group(s)
Go To Commenting
The views expressed herein are the sole responsibility of the author and do not necessarily reflect those of this website or its editors.