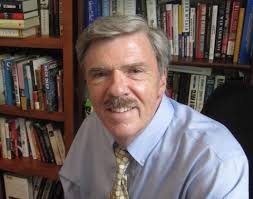 Those of us who have been following his work for decades know how principled and reliable, and what a great resource, that work was. We took him for granted as a touchstone of journalist integrity, to which we could always return to get a take on important issues that, whether we agreed with it or not, was unfailingly honest, thoroughly-researched, and demanding of our attention.

We also took for granted his own life story of being blocked from doing that honest, principled work in the mainstream media, and having to continue his career through a self-financed independent newsletter and website (Consortium News), a trajectory that guaranteed his continuing integrity and his relative obscurity.

We took too much for granted.

As the rabid Red that I am, I also want to note that Robert Parry is not someone whom I would call (or who, I think, would have called himself) a "leftist," let alone a "socialist." I winced a little whenever I read him giving Obama such generous credit for good intentions. He was, I would say (and I think he would have), a liberal. He is also someone who worked according to the journalistic ethic of principled intellectual honesty that liberalism claims to represent. In the outpouring of shock and sadness from leftists like myself--who, it's clear from that outpouring, followed him with immense respect--I think we're recognizing him as one of the last of the honorable liberals. Seeing him go is like watching the death of one of the last magnificent individuals of a dwindled breed that was always smaller than it seemed.

I recommend to everybody, especially those who don't know Robert Parry, to go forthwith and listen to Parry's conversation on Gary Brecher's Radio War Nerd podcast (starts at 33:30 in the stream).

It's a long interview, but it's amazing--a full course in American political and media history of the last forty years. Listen to it in segments if you have to.

Related Topic(s): Alternative Media; Corporate Media; Media; Media Independent; Media Manipulation; Progressive Media; Robert Parry, Add Tags
Add to My Group(s)
Go To Commenting
The views expressed herein are the sole responsibility of the author and do not necessarily reflect those of this website or its editors.

STAY IN THE KNOW
If you've enjoyed this, sign up for our daily or weekly newsletter to get lots of great progressive content.
Series: "Media"