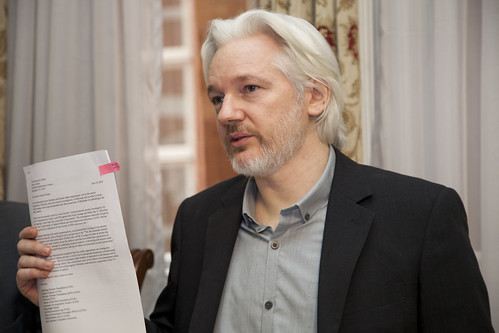 Hong Kong Here in this ultra-modern city on the coast of southern China, I read in the morning paper that 11 consulates representing most of the nations of Europe, have lodged protests with the city's chief executive Carrie Lam Cheng Yuet-ngor over a controversial new extradition bill that if passed would allow Hong Kong to extradite suspects to nations with which Hong Kong does not have an extradition deal. That would include China (a country of which Hong Kong is an integral part while still retaining local control over such things as its legal system which remains based upon British Common Law, not Chinese law).

I was not surprised to see that the US Consulate here in Hong Kong did not join in the protest against the new bill.

After all, the US is itself clearly flouting the extradition treaty it signed in 2003 with the UK, which states that neither nation will extradite to the other anyone who faces politically motivated prosecution. Yet just this past week, the US filed 17 charges of violation of the hoary US Espionage Act, a measure enacted by Congress in 1917 during the First World War that has rarely been used since then and that is widely viewed as designed to target political opponents of the government.

How, really, could the US with a straight face object to Hong Kong passing an act that endorses extradition for political "crimes" while Washington is aggressively pursuing Wikileaks founder Julian Assange for political "crimes" based upon a law that could end up, if he were extradited and then tried and convicted in the US, with his being sentenced to life for simply publishing truths about US war crimes in Iraq and Afghanistan?

There is some connection between Hong Kong's proposed new extradition law and the US obsession with capturing and prosecuting Assange. It was to Hong Kong, recall, that Edward Snowden, the National Security Agency whistleblower, first fled to avoid prosecution for releasing tens of thousands of documents exposing the monstrous spying program being conducted against all Americans and most foreign countries by the NSA. Because of Hong Kong's model law and practice on extradition, Snowden, with the assistance of local activists and attorneys and lawyers for Wikileaks, was able to board a plane to Russia, which eventually granted him asylum, thus keeping him safely out of the clutches of the insidious US prosecutorial machine.

There were howls of outrage from thuggish members of the US Congress for Assange's and for Snowden's heads, and even suggestions from the likes of Secretary of State Hillary Clinton, for the use or a Hellfire-missile-firing drone to terminate both men a suggestion passed off as a joke when it was leaked to the public, but that must be taken seriously since a policy of extrajudicial targeted killing was adopted in 2001 by President George Bush, later expanded by President Barack Obama, and continued under President Donald Trump (that's one Obama executive order he hasn't undone!). Under that policy hundreds of people, including Americans, have been murdered on the orders of any one of three US presidents in clear violation of constitutional and international law. Many more innocents, including children, have died, slaughtered offhandedly as "collateral damage" in these illegal presidential terminations.

I find myself thinking about all this as I spend a week back in this city where I spent five years back in the 1990s working as a foreign correspondent for Business Week magazine covering what was then a colony of Britain, as well as the police state of China, which was about to regain sovereignty over Hong Kong.

China agreed during negotiations in the run-up to the handover of Hong Kong from the UK to China in 1997, to allow the city to remain under local governance in all but foreign affairs for a period of 30 years, with a fully elected legislative council called Legco, and a China-appointed chief executive who would, at least theoretically, become also elected in 2017 (the chief executive was not only always appointed by Britain prior to the handover, and was always a white, male Brit, never a local Hong Kong native as subsequently under Chinese sovereignty). There has been some slippage in that promise, notably when Chinese law enforcement officials kidnapped and brought to the mainland for punishment several editors and publishers of some salacious books embarrassing to China's leaders, but by and large, Beijing has kept its hands-off promise. Hong Kong still has freedom of press, assembly and speech (even to the point of having annual well attended remembrances of the June 4, 1989 Tiananmen massacre of students and workers by Chinese troops in Beijing). And while China has not been shy about trying to control things here through behind-the-scenes pressure and sometimes strong-arm measures, I would still say that in many ways it remains a freer society than what we have left in the US courtesy of the ironically named 2001 PATRIOT Act and a lazy and easily deceived and distracted citizenry that has shown itself, since that year of the 9-11 attacks, to be quite willing to sacrifice freedom in return for a promise (real or not) of "security."

The years-long US government pursuit of Assange, which has included using intelligence agency connections with Sweden to trump up "rape" charges against the Wikileaks founder as an excuse for extraditing him from the UK, and pressuring and ultimately bribing the leader of Ecuador to withdraw the asylum an earlier president of the country had granted him in the little Latin American country's London embassy, allowing British law enforcement authorities to enter that supposedly sovereign territory of another nation to drag him out and face charges of bail jumping.

Assange had always claimed that he had skipped bail on a scheduled court hearing over a Swedish government extradition request that it was all a trumped up affair designed to get him to Sweden where he could then more easily be deported to the US to face espionage charges. That claim was scoffed at by British prosecutors, Swedish prosecutors and by most of the US media, including publications like the NY Times and the Washington Post. Those two publications had been all too happy to publish Wikileaks documents, but both have subsequently derisively mocked Assange's claim to be a fellow publisher and journalist entitled to First Amendment protection from US prosecution for Wikileaks' releasing of classified government documents obtained from whistleblowers like Snowden and Army private Chelsea Manning.

These smug supposed models of journalistic professionalism and integrity have been happy to have Assange's Wikileaks do the dirty drudge work of gaining the trust of whistleblowers, receiving their leaked classified materials documenting criminal and corrupt behavior by the US and other governments, and disseminating those documents to the world's media while protecting their sources the very job that the reporters at publications like the Times and Post should be doing but then turn around and claim that Assange is not a real journalist and Wikileaks is not a real publication because it supposedly doesn't have a fine, professional editorial staff vetting its documents to protect privacy and of course "national security." It's a joke really, when one considers the error-filled and propaganda-peddling articles both publications regularly put into print despite or perhaps with the endorsement of those "professional" editors. (Besides which Wikileaks does review and where necessary, properly censors the material it releases.)

This pinched view of what constitutes the "press" when it comes to First Amendment protection ignores the reality that the tradition of press freedom was actually established way back in 1735, well before the founding of the United States or the passage of the Constitution and Bill of Rights. That's when John Peter Zenger, the owner of a printing press in the colony of New York on which he published a small newspaper, the New York Weekly Journal, won acquittal in a criminal libel suit brought against him by the governor of the colony of New York. Was Zenger, an immigrant from Germany who's English skills are described as "poor," a "real" journalist with an editor overseeing his work for accuracy when he won that groundbreaking case? No. And how about that journalistic pioneer Ben Franklin? Did he have an editor checking his work for accuracy, respect for privacy, etc. in 1729 when he and partner Hugh Meredith began publishing their Pennsylvania Gazette? Of course not! While we're at it, how about legendary revolutionary pamphleteer Tom Paine, whose impassioned and uncompromising skewering of oppressors helped fire up the rag-tag rebel troops opposing the mighty British army, but who, ironically, had to be rescued from a French prison and looming execution on a charge of treason by the intervention of then US Ambassador to France James Monroe. An honorary citizen of France, at the time, Paine had excoriated in print his new host government for its prolific application of the death penalty and the guillotine, and for good measure had denounced god and religion. Americans were outraged at his incarceration for simply writing and publishing what he thought.

Did Paine ever have an editor? No.

In any case, with the filing by the US Justice Department of 17 new charges against Assange of violating the US Espionage Act, we know for certain that Assange was absolutely correct to have jumped bail in 2012, and to have accepted an asylum offer from Ecuador. It was never Assange's intent to remain holed up in the Ecuadorian Embassy, which is little more than a modest office suite on the second floor of an apartment building in London. But under pressure from the Washington, the British government of Theresa May had shamelessly refused to guarantee him, in accordance with 1961 Vienna Convention on Diplomatic Relations, safe passage in an Ecuadorian Embassy vehicle to an Ecuadorian airliner for a secure transfer to asylum in Ecuador. (That's the same convention the US government is currently violating in the case of the Venezuelan Embassy in Washington, which US federal police have attempted to the unelected pretender Juan Guaido.)

Related Topic(s): Assange; Asylum; Corporate Media; Extradition; First Amendment; Freedom Of Speech; Freedom Of The Press; Presstitutes; Snowden, Add Tags
Add to My Group(s)
Go To Commenting
The views expressed herein are the sole responsibility of the author and do not necessarily reflect those of this website or its editors.